Kenya's Interior Ministry has said its armed forces are "in control" of the Westgate Shopping Mall in Nairobi.

The army and police have been involved in a stand-off with al-Shabaab militants since they attacked the shopping centre on Saturday, killing 62 people and injuring dozens more.

The ministry used its Twitter account to say the army was searching all floors of the shopping centre for any militants.

It said it believes that all the remaining hostages have been released.

Earlier, a series of loud explosions and gunfire were followed by a plume of black smoke.

Kenya's interior minister told a news conference that the militants had set a fire with mattresses in a supermarket on the centre’s lower floors.

He said the militants were all men, but some wore women's clothing during the assault.

At least two militants have been killed so far today, while another died in the initial attack on Saturday.

The gunmen came from "all over the world", Kenya's military chief said, adding: "We are fighting global terrorism here."

Security officials near the scene had said the blasts heard at lunchtime were caused by Kenyan forces blasting a way in.

The action came a day after Kenyan President Uhuru Kenyatta dismissed a demand that he pull Kenyan forces out of neighbouring Somalia.

Al-Shabaab had warned it would kill hostages if the police and army moved in.

A senior police officer said the Kenyan authorities had been receiving advice from Western and Israeli experts.

The Kenyan Embassy has confirmed that the son of the former Kenyan Ambassador to Ireland, Catherine Muigai Mwangi, and his fiancée are among the dead.

Ms Mwangi had returned to Kenya last month after six years in Ireland.

Books of condolence will be open between tomorrow and Friday 27 September at the Kenyan Embassy in Ballsbridge.

US President Barack Obama has called the attack a "terrible outrage" and said the US was providing all the cooperation it could to Kenya.

"We stand with them against this terrible outrage that occurred," Mr Obama said during a meeting with Nigerian President Goodluck Jonathan in New York.

Both men, who are in the city for the United Nations General Assembly, expressed condolences to the Kenyan president.

"I feel the pain of President Kenyatta ... terror anywhere is terror on all of us," Mr Jonathan said. 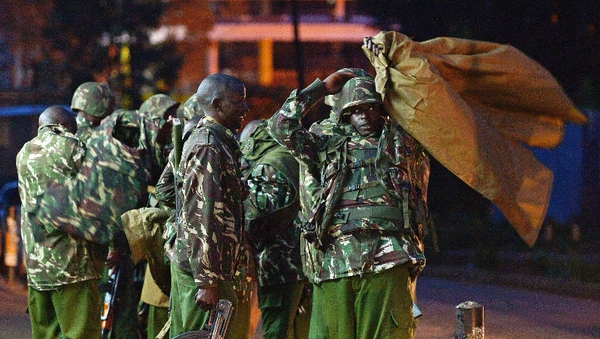