The Data Protection Commissioner has said that Mick Wallace this afternoon lodged a complaint with his office about the disclosure of information received by Minister for Justice Alan Shatter.

Mr Wallace, and independent TD, asked the commissioner to investigate what he considers to have been an improper disclosure.

Speaking on RTÉ's Six One News, Billy Hawkes said the complaint would be investigated.

He said the minister would be asked to comment on it and to respond to the claims made by Mr Wallace.

Mr Wallace will then receive a formal decision as to whether or not a breach of data protection legislation has taken place.

Mr Hawkes said as the information was Mr Wallace's and was disclosed by Mr Shatter, it was up to Mr Shatter to justify the basis and the justification for disclosing data that came into his possession as Minister for Justice.

Mr Shatter has said he received information about the gardaí using their discretion regarding an incident involving Mr Wallace in the course of a briefing from the force.

Mr Wallace said he was using his mobile phone while driving in Dublin last year.

The minister said he felt obliged to make the information public because Mr Wallace was adamant that gardaí should not use discretion.

He said there is no difference between gardaí using discretion on penalty points that have been issued and incidents like the one involving Mr Wallace.

Mr Wallace confirmed that an incident occurred at the Five Lamps in north Dublin in which gardaí spoke to him about using a mobile phone when driving.

Speaking to RTÉ's Today with Pat Kenny this morning, Mr Wallace said he will be making a complaint to the Standards in Public Office Commission (SIPO).

This afternoon, Mr Wallace said he would not be able to lodge the complaint until tomorrow.

He is out of the country and is unable to sign the necessary documents.

Deputy Wallace wants SIPO to investigate how the justice minister got information about the incident.

The complaint is in relation to Mr Shatter's decision to reveal the information last week during a television debate on RTÉ's Prime Time.

The TD said that two gardaí pulled up beside him while he was holding the phone. He said he apologised when he realised he should not have been using the device.

Mr Wallace had initially said he could not recall any incident in which gardaí had come across him using a phone while driving.

He said he failed to initially recall the incident as he had gone "into studio with no notes and 12 points in my head" which he wanted to make.

His memory of the incident was refreshed when a journalist asked him over the weekend if he had been stopped at the Five Lamps last year by gardaí.

Mr Wallace said he was not stopped but said he was parked at traffic lights and was using his phone when a garda vehicle pulled up beside him. "Did they exercise discretion, yes", Mr Wallace told RTÉ.

Mr Wallace said he wanted to know how the minister came to be in possession of the information and to explain why he used it to identify Mr Wallace in the debate.

Taoiseach Enda Kenny said he was 100% behind Mr Shatter. Mr Kenny said the minister was not collecting files on any individuals.

Call for Shatter to resign

Fianna Fáil Justice Spokesperson Niall Collins has reiterated his call for the minister to resign over the remarks.

"He has clearly crossed a line. He has blatantly abused his position, in a cynical act to smear another individual," he said.

"I really think it is a resigning matter."

Mr Collins said this was his personal view, but the Fianna Fáil Parliamentary Party would meet to discuss the matter further.

He said it was "worrying" that the Taoiseach was taking a "weak position" in relation to his Minister for Justice. 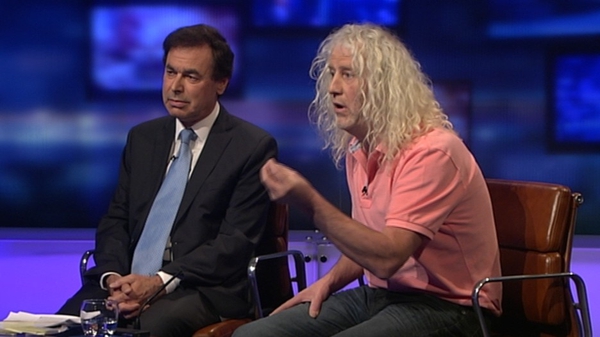