A police officer is being treated for injuries he sustained during clashes with loyalists in east Belfast.

The skirmishes broke out on the Newtownards Road following a protest by up to 2,000 loyalists outside Belfast City Hall this afternoon against new restrictions on flying the union flag.

A car was later set on fire in east Belfast and the city remains tense for the sixth night in a row.

Police said loyalist paramilitaries had organised some of the violence in recent days.

Last night, eight officers were injured and 13 people arrested in clashes between loyalists and police in Belfast.

The motion had been proposed by Alliance Party members of the council on Monday night.

It was supported by Sinn Féin and SDLP Councillors who originally wanted to completely end the 107-year-old tradition of flying the flag over Belfast City Hall.

In recent days, the Alliance Party has been targeted by some loyalist groups.

The Police Service of Northern Ireland had urged those who have a legitimate right to protest to take a step back and stay out of the city centre.

PSNI Assistant Chief Constable Will Kerr said: "The risk to the public safety of all of those involved is simply too great."

Traders were worried it could affect business on should have been one of the busiest shopping days of the year.

A children's walk, Christmas party and Santa planned by a charity for youngsters with heart disease was cancelled.

Violence erupted in towns across Northern Ireland this week after loyalists took to the streets to vent their anger.

Last night, six officers were injured as they dealt with disorder near Crumlin Road and Ligoneill Road in Belfast.

Trouble flared at Shaftesbury Square - a popular party spot near Queen's University - after a man tried to drive a black van through a loyalist road block of about 200 people.

Eye witnesses said police officers were pelted with stones, bricks, bottles and other missiles. A number of vehicles were also hijacked and set on fire.

PSNI water cannons were deployed, including one in O'Neill Road in Newtownabbey on the outskirts of north Belfast as a crowd of 70 people blocked the road and attacked police with bricks and masonry.

Cars there were also burnt outside the council offices, and hundreds of people attending a Christmas function had to be evacuated.

There were also reports of sporadic disorder in other parts of the city.

Mr Kerr said a total of 27 police officers had been injured during the unrest this week. 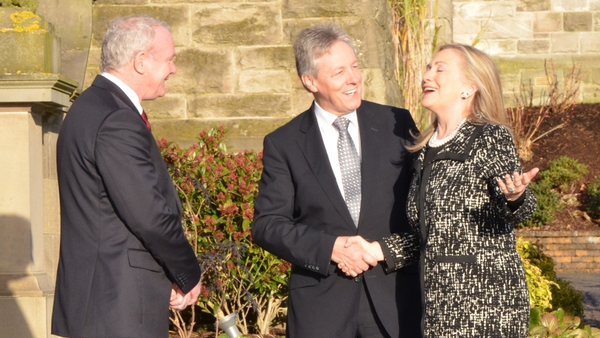