US Secretary of State Hillary Clinton has condemned the street violence in Northern Ireland that broke out this week over the controversial flags issue.

Speaking at Stormont, Mrs Clinton said the violence was a reminder that the work of peace was not yet complete.

Mrs Clinton and her husband, former US president Bill, have been long-time supporters of the peace process in Northern Ireland.

She condemned the death threats issued to Alliance Party MP Naomi Long over the flags issue, and said she was very distressed by the news.

Loyalists have been staging protests to show their opposition to the decision to restrict the number of days the flag is flown over Belfast City Council.

Mrs Clinton said: "There will always be disagreement in democratic societies, but violence is never an acceptable response to those disagreements. All parties need to confront the remaining challenge of sectarian divisions, peacefully together."

With loyalists threatening another protest in Belfast tomorrow - expected to be the busiest shopping day so far this year - Mrs Clinton said: "People have strong feelings, but you must not use violence as a means of expressing those strong feelings.

"The only path forward is a peaceful democratic one. There can be no place in the new Northern Ireland for any violence. The remnants of the past need to be quickly, unequivocally condemned. Democracy requires dialogue, compromise and constant commitment by everyone to protect the rights of everyone."

Later, she was to attend a lunch in her honour at the new Titanic Building in Belfast organised by the Ireland Funds.

Mrs Clinton's visit will be her last to Belfast before she steps down from the Obama administration.

She was in Dublin this week for the two-day Organisation for Security and Co-operation in Europe gathering of foreign ministers from some 50 countries.

The meeting at the RDS marks the end of Ireland's chairmanship of the group. 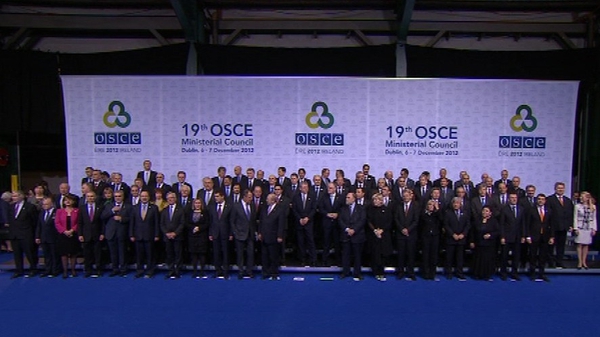