Foreign ministers from over 50 countries are in Dublin for a meeting of the Organisation for Security and Co-Operation in Europe at the RDS.

Those attending the ministerial council meeting include US Secretary of State Hillary Clinton and Russian Foreign Minister Sergey Lavrov.

He said it would seek to get agreement on issues such as media freedom, tackling drug trafficking and fighting corruption.

He said that he expected to raise the issue of Syria and the Middle East during a series of bilateral meetings.

Mrs Clinton held talks with the Tánaiste on the fringes of the gathering earlier.

They discussed the negotiations towards an EU-US trade agreement, which will be a key part of the Irish Presidency next year, as well as work visa arrangements for Irish people in the US.

After the meeting Mr Gilmore said Ireland would make €250,000 available to Irish voluntary associations helping the victims of Hurricane Sandy around New York.

Mrs Clinton paid a courtesy call on President Michael D Higgins at Áras an Uachtaráin where they discussed their shared interest in global human rights.

The OSCE will be 40 years in existence in 2015 and although it is often overshadowed by organisations such as the EU and NATO, it has seen its role in human rights, conflict prevention and the promotion of democracy expand.

It brings together 57 countries across a spectrum of diverse political and geographical backgrounds.

For that reason finding common ground on divisive issues, such as human rights, has often proved elusive.

Ukraine will take over chairmanship of the OSCE after Ireland.

During its chairmanship, the Government hosted meetings on internet freedom, conflict resolution and combating corruption in the past year.

The Tánaiste has also been involved in trying to push for progress in some of the "frozen conflicts" in the former Soviet Union.

Mrs Clinton delivered a speech on "US Achievements in support of human rights," at The Helix in Dublin City University.

Mrs Clinton told the audience she was watching the events unfolding in Cairo with growing concern.

She said people deserve a constitution that protects the rights of all Egyptians.

She said the upheaval in Cairo and other places in Egypt shows dialogue is urgently needed and called on all the stakeholders to settle their differences through discussion and debate rather than violence.

She said they are scrubbing websites of facts and ideas that challenge their grip on power.

They are reading blogs and then arresting the bloggers, she said, adding that the rights of individuals to express their views are universal.

“Freedom is freedom,” she said.

Mrs Clinton went on to speak about women’s rights.

She told the audience it is foolish to treat half the population as another species, and that if women were treated equally to men in rights and dignity we would see economic and political progress come to places that are teetering on the edge. 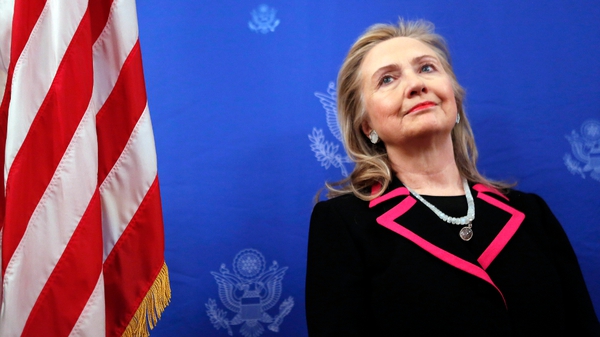