Independent News & Media, the joint owner of the Irish Daily Star, said it believes that a call to close the newspaper over the publication of topless photographs of Kate Middleton is disproportionate.

It said publishing the photos was a poor editorial decision that occurred without reference to either shareholder.

Last night, Richard Desmond, chairman of Northern and Shell, which co-owns the newspaper with INM, said he had begun "immediate steps" to close down the joint venture.

INM said that it believes that the circumstances that led to the "regrettable" decision by the newspaper to republish pages from French magazine Closer warrant immediate investigation and said steps are already under way in this regard.

It noted that the newspaper employs over 120 staff, directly and indirectly.

It emerged earlier today that Kate, the Duchess of Cambridge, and her husband, Britain’s Prince William, have not ruled out taking legal action against the publishers of the newspaper over the photos.

The photos were taken in France and show the duchess sunbathing topless.

The couple have already begun a civil action against Closer, which first published the pictures.

Italian gossip magazine Chi has said it plans to print further pictures of the duchess this week.

Speaking about possible legal action against the Irish and Italian publications, a royal family source said: "We are keeping our options under review but clearly there is a limit to how much action we can take.

"It's limited by time and resource, but if there is a proportionate response we can find, we will do.

"But our focus remains on dealing with the paparazzo if we can identify him or her and the civil action we have already brought against Closer."

The duke and duchess are to make a criminal complaint against the photographer who took the pictures, a spokeswoman for the British royals said this evening.

Lawyers for the pair will make the complaint to the French prosecutor tomorrow.

The couple want the person responsible to be charged with a criminal offence for invading their privacy.

A spokeswoman said: "We can confirm that a criminal complaint is to be made to the French Prosecution Department tomorrow.

"The complaint concerns the taking of photographs of the Duke and Duchess of Cambridge whilst on holiday and the publication of those photographs in breach of their privacy."

Once the complaint is made, it is up to the prosecutors to decide whether to investigate and pursue it. 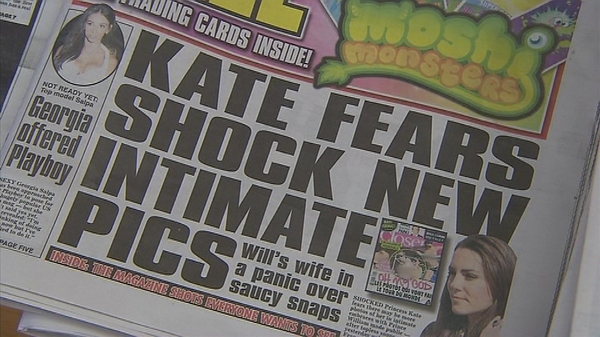