The trial of the former Bosnian Serb military chief, Ratko Mladic, has been adjourned indefinitely in The Hague.

"The hearing is adjourned sine die," said Judge Alphons Orie, three hours into the trial's second day at the International Criminal Tribunal for the former Yugoslavia.

He said there were "irregularities" in the transfer of prosecution documents to the defence to enable it to prepare for the trial, but that the court hoped to announce a date soon for the resumption of proceedings.

Mladic, the so-called "Butcher of Bosnia" is charged with war crimes, crimes against humanity and genocide over the 1992-1995 war in the Balkan state and in particular the Srebrenica massacre of almost 8,000 Muslim men and boys.

"Mladic himself was on the ground and personally involved," prosecuting counsel Peter McCloskey told the court, showing footage of the former general triumphantly entering Srebrenica and congratulating his men.

"We give this town to the Serbs as a gift," Mladic said in the video footage taken in Srebrenica after the mass killings in what was meant to be an UN-protected enclave.

Prosecutors say Mladic orchestrated the mass killings as part of a brutal campaign of ethnic cleansing in the 1992-95 Bosnian war that killed 100,000 people and left 2.2m homeless.

Mr McCloskey showed the court photographs of graves in Srebenica, saying: "This is an example of the horror created by Mladic."

He said most military orders were given orally, but that certain "crucial" documents had survived and that former Mladic subordinates were willing to testify against him.

Now 70, Mladic has been indicted on 11 counts of genocide, war crimes and crimes against humanity.

The former Bosnian Serb commander had pleaded not guilty to the charges at an earlier court hearing last June. He faces life imprisonment if convicted.

Defence lawyer Branko Lukic said Mladic suffered three strokes in 1996, 2008 and 2011 and was partly paralysed on his right side.

Mladic, however, appeared in better condition than at his first appearance last June when he told the court he was a "sick man". 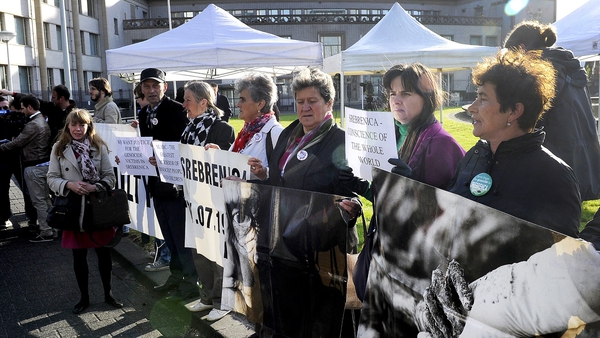