"Ratko Mladic assumed the mantle of the criminal goal of ethnically cleansing Bosnia," prosecutor Dermot Groome told the judges at the Yugoslav war crimes court in The Hague.

Mr Mladic, 70, has been indicted on 11 counts of genocide, war crimes and crimes against humanity for his role in the Balkan country's brutal 1992-95 war that killed 100,000 people and left 2.2m homeless.

Mr Mladic sarcastically briefly applauded judges as they walked into the courtroom.

He pleaded not guilty to the charges at an earlier court hearing last June.

Outside the courtroom, a group of 25 women belonging to the "Mothers of Srebrenica" organisation representing widows and victims of the Srebrenica massacre, held a demonstration.

"This is the biggest butcher of the Balkans and the world," Munira Subasic said. She lost 22 relatives to Bosnian Serb military forces when the enclave of Srebrenica was overrun in July 1995.

"I'll look into his eyes and ask him if he repents," said Ms Subasic, who said she would watch the trial's opening from the public gallery.

Mr Groome displayed population maps showing the ethnic distribution in Bosnia before and after the war.

He explained how mixed or predominantly Muslim municipalities became exclusively Serbian after a campaign of ethnic cleansing he said was one of Mr Mladic's "strategic objectives".

The prosecutor said the very first objective was to "separate the Serbs from the other two national communities" - Bosnians and Croats.

Judge Orie warned both Mr Mladic and people sitting in the public gallery not to have any eye contact during the trial, after one of them was heard to utter the word "vulture".

"Mr Mladic, try and focus your attention on what's happening inside the courtroom," the judge said.

Prosecutors also hold him responsible for the 44-month siege of Sarajevo where his forces waged a "terror campaign" of sniping and shelling that left an estimated 10,000 people dead, the vast majority of them civilians.

Mr Groome said: "Sarajevo was a model of diversity, a cosmopolitan city.

"They (Bosnian Serb leaders) sought to destroy it, to sever the city in half, with the Serbs living in one part and the non-Serbs in another part."

It was in pursuit of a "Greater Serbia" that Mr Mladic allegedly also ordered his troops to "cleanse" other Bosnian towns, driving out Croats, Muslims and other non-Serbs.

After the war, Mr Mladic continued his military career but went into hiding in 2000 after the government of his ally in Serbia, Slobodan Milosevic, fell.

Indicted for war crimes, he was on the run until May 2011 when he was arrested at a relative's house in Lazarevo, northeastern Serbia and flown to a prison in The Hague a few days later.

Two days ahead of the trial, his lawyers filed a request for a six-month adjournment, saying they needed more time to prepare a defence.

The judge said today the court was still considering whether to postpone the case, on the grounds that the prosecution made a "significant error" which could affect the course of the trial.

During a string of pre-trial hearings, the ageing former general complained of his poor health and asked Mr Orie if he could wear his military uniform.

Defence lawyer Branko Lukic said Mr Mladic suffered three strokes in 1996, 2008 and 2011 and was partly paralysed on his right side.

"We are not ready for trial. I think Mladic wants this trial to start more than we do," he told journalists.

He said Mr Mladic had had extensive medical and dental surgery since his capture.

"He lost a lot of teeth" during his years as a fugitive, Mr Lukic said. "They had to repair him completely."

The trial is to continue tomorrow, before resuming on May 29. 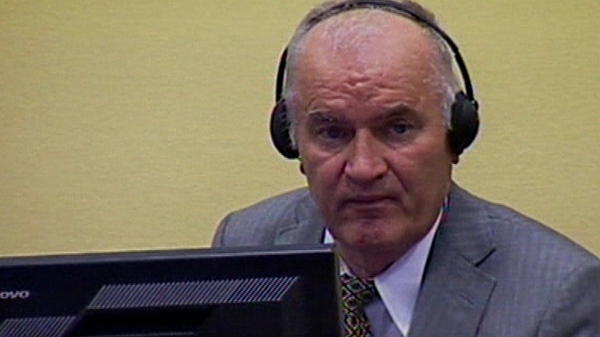 Mladic trial will not be split into two parts