The trial of 61 men over the death of 74 soccer fans in Egypt's worst stadium disaster was adjourned today.

The adjournment came after a rowdy first session that was suspended briefly when dozens of defendants hurled abuse at the judge.

Judge Abdel Magid Mahmoud walked out as the defendants jumped on benches in the courtroom's steel cage and waved their fists at the bench, denying any role in the deaths and demanding that the true culprits be punished.

"Either we get justice for them or we die ourselves!" the defendants yelled.

The judge returned when calm was restored and set 5 May for the next session to give the court time to call witnesses, prepare documents requested by lawyers and summon more of the accused to stand trial.

Many of those killed on the night of 1 February were crushed when panicked fans tried to escape from the stadium after a post-match pitch invasion by supporters of local side al-Masry. Others fell or were thrown from terraces, witnesses said.

It was the country's deadliest incident since protests toppled long-serving President Hosni Mubarak in February 2011 and it deepened frustration that a police force weakened by last year's uprising seemed unable to protect the population.

Fans of the visiting team, Al Ahly, accused the Interior Ministry of deliberately causing the disaster in revenge for their role in toppling Mubarak and their continued hostility to an unreformed police force.

The court ordered that Interior Minister Mohamed Ibrahim and the heads of al-Masry club, the Egyptian Football Association and the Supreme Sports Council be named as concerned parties in the case.

This means they will not be exposed to criminal charges but may be told to pay compensation if found responsible for acts of their subordinates, state news agency MENA reported. 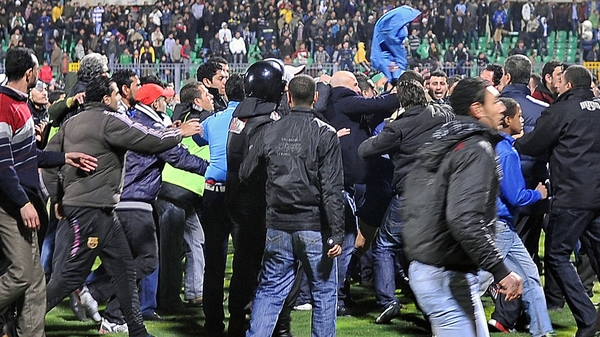