74 people were killed when violence erupted following a soccer match in the Suez Canal city of Port Said on 1 February.

Lax policing was blamed for a stampede. Nine members of the police and three officials from the Al-Masry football club are among those charged.

While two minors will be sent to a children's court, the prosecutor's office said in a statement.

Fans of home team Al-Masry invaded the pitch after their team beat the most successful club in Africa, Cairo's Al-Ahly, 3-1.

Rocks, bottles and fireworks were fired at Al-Ahly supporters, causing chaos and panic as players and fans fled in all directions.

Steel doors at the stadium were bolted shut, trapping fans trying to escape from the stands and dozens were crushed to death, witnesses said.

A parliamentary enquiry blamed both fans and poor policing for the tragedy, and the Port Said head of security, Essam Samak, was fired. He is among the 75 now due to stand trial.

The violence marked one of the deadliest incidents in football history, and came amid claims by witnesses that the security forces did little to prevent the rioting.

Several thousand hardcore supporters of Al-Ahly, known as the Ahly Ultras, marched in central Cairo today to demand justice for their fallen comrades.

Holding up posters of those who died in the violence, the marchers chanted against the ruling Supreme Council of the Armed Forces, which took power when president Hosni Mubarak was ousted by a popular uprising.

They also called for the restructuring of the interior ministry, with which the football supporters have often clashed, even before the uprising.

"The people want the cleansing of the interior ministry," they chanted, most donning black T-shirts or red, their team colour.

The stadium deaths sparked days of violent protests in Cairo, in which another 16 people were killed.

Many believe the football riot was orchestrated either by the police or supporters of Mubarak, a reflection of distrust towards the ruling military. 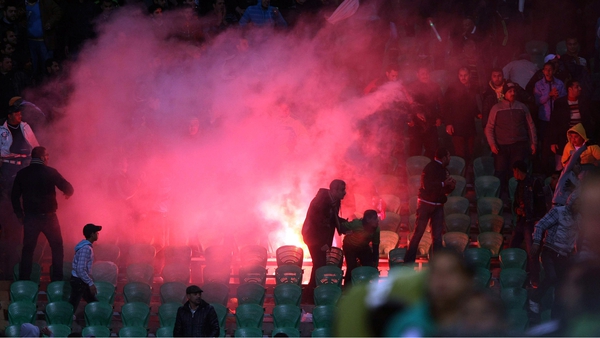