Nearly 82,600 people (1.8% of the population) speak Irish every day outside of school according to the first definitive results of the 2011 Census.

This makes it the third most used language in the country.

The Census figures, released by the CSO today, show that 119,526 of people in Ireland speak Polish at home while 56,430 speak French.

Meanwhile, 35% of people in Gaeltacht areas said they spoke Irish on a daily basis outside of the education system.

In addition to Irish and other languages, the Census recorded the standard of English among those who spoke foreign languages.

It found that those from Denmark had the highest ability, while people from Lithuania had the lowest.

Today's publication is the first of 13 reports on the Census results that will be published between now and the end of the year.

Co Laois is the fastest growing county in terms of population, while the total number of non-Irish nationals in the country has increased by over 29%.

The results show that there are now almost 2m homes in Ireland, but 14.5% of that housing stock is vacant.

On social matters, the Census found the number of divorced people in Ireland has increased by 150% since 2002.

However, the Census figures also show an increase in the number of people who are married.

The biggest increases in numbers of children were among women in their 30s.

In the three months around April 2011, the average age of a mother for births registered was 31.8 years.

Offaly had the highest rate of children born to women aged over 45. 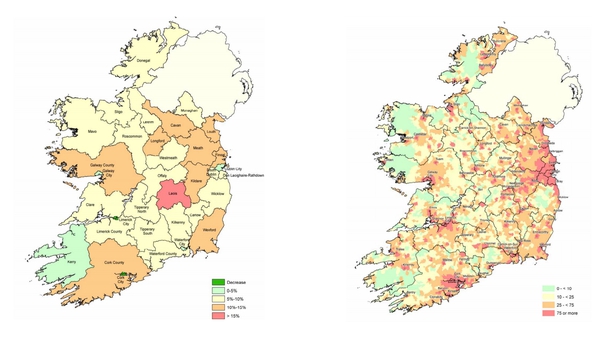