The Department of Justice and the Department of Finance websites were both taken offline for a time in the early hours of this morning following an apparent cyber attack.

Both websites were down for around an hour after being targeted with a denial of service attack.

Such attacks often see a website's servers overloaded with huge numbers of simple requests, which brings the website down.

In a statement, the Department of Justice website said it experienced a Distributed Denial of Service (DDoS) attack.

It said: "There seems to be no damage done to the website, however a review is being conducted this morning. The situation continues to be monitored by the Department of Justice and the Department of Communications.

"The Government is aware of the potential threat of this type of cyber attack and the Department of Communications is co-ordinating a whole of Government response to this threat."

Minister of State with responsibility for Research & Innovation Sean Sherlock described the cyber attack as an ''unjustifiable response for what is simply a move by Government to ensure that we comply with EU copyright legislation and which re-states the rights that already exist in Irish copyright law".

He said such legislative moves were not intended to "block websites or to limit the freedom of the internet".

A Twitter account called Anonymous Sweden (@AnonOpsSweden) appeared to claim responsibility for the attack, saying it was in protest against planned new copyright legislation in Ireland.

"When we attack after office hours, we send a wake up - warning shot. no more no less," Anonymous said in a statement on Twitter.

Subsequent tweets also saw the distribution of email addresses and home phone numbers for all Fine Gael and Labour TDs.

Two other government websites - the Freedom of Information website (foi.gov.ie) and an anti-human trafficking website Blue Blindfold (blueblindfold.gov.ie) - were also apparently affected by the attack.

However, a later Tweet denied that Anonymous had sought to bring those websites down.

There has been a growing campaign in recent weeks against the proposed Irish introduction of the European Communities (Copyright and Related Rights) Regulations 2011.

Since Monday, an online petition at stopsopaireland.com has garnered 31,580 signatures in protest against the proposed enactment of legislation. 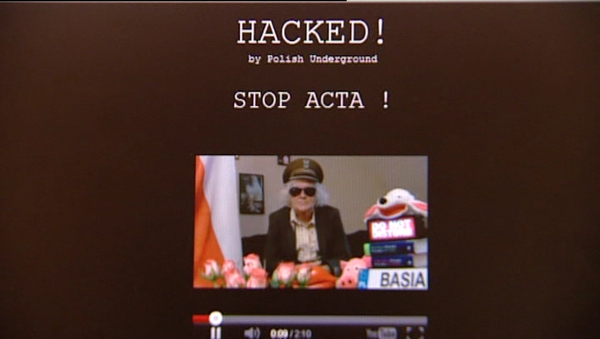