Minister Joan Burton has called on Sinn Féin's Aengus Ó Snódaigh to withdraw an allegation that he made in the House that the Minister had ascribed the term 'wayward' to certain recipients of disability allowance.

Minister Burton had said she had never used the term, or the term 'scrounger' which the Sinn Féin TD used.

In heated exchanges, Mr Ó Snódaigh told the Minister to 'shut up' and sit down' at different points.

He told the Minister she had lost the run of herself and her true colours were beginning to show.

Mr Ó Snódaigh said the Government had made a choice to hit the weakest in society when it could have decided not to pay unguaranteed bondholders.

Earlier, Fianna Fáil's Éamon Ó Cuív told the Dáil that his party protests against the guillotine on the Social Welfare Bill.

For example, he said it has emerged that if a person's partner of spouse is a carer, they lose €120 a week.

Tánaiste Eamon Gilmore said it was "a bit rich" for Mr Ó Cuív to argue about the time provided for the debate on the Social Welfare Bill, since last year his Government had not provided much time for that element of the Budget legislation.

Mr Gilmore said there was no guillotine today and that debate on the bill will continue tomorrow.

Bishops urge reversal of some cuts

Ireland’s Catholic bishops have urged the Government to reverse proposed cuts to child benefit payments and the fuel allowance scheme.

In a statement following their winter meeting in Maynooth, Co Kildare, they criticise the Government's two-year plan to cut child benefit by 16% for the third child and 21% for fourth and subsequent children, saying it could have a devastating impact on larger families with low incomes.

They say the six-week curtailment of the fuel allowance season could have a serious impact on the elderly and the sick.

Elsewhere, People Before Profit Deputy Joan Collins described the Social Welfare cuts being introduced in the budget as mean, cruel, sneaky and unnecessary.

She described the cuts as death by a thousand cuts, a budget that had been recession proofed for the wealthy on the backs of the poor. 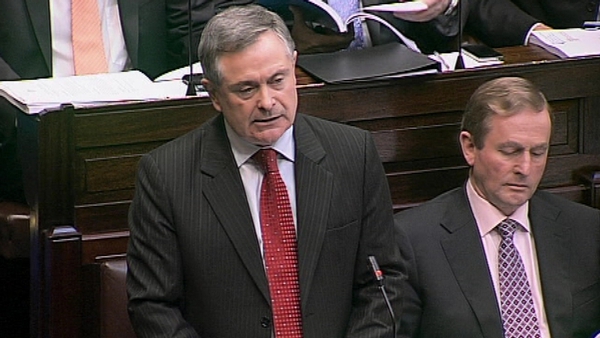