Developer Tom McFeely has won a reprieve in the Supreme Court against a three-month prison sentence and €1m fine for contempt.

Dublin City Council, which had brought the original case against Mr McFeely, did not contest his Supreme Court appeal this afternoon.

Earlier, President of the High Court Mr Justice Nicholas Kearns imposed the penalties for a "very serious breach" of a court undertaking to rectify fire safety risks at the Priory Hall apartment complex.

This followed a High Court ruling on 4 November that Mr McFeely had failed to comply by inserting fire break in exterior walls.

He was ordered off the site and the High Court ordered him to be jailed for contempt.

But later this afternoon, the Supreme Court agreed with counsel for Mr McFeely that the works deadline was not until 28 November and Mr McFeely could not carry out works after being ordered off the site.

The stay will last until a full Supreme Court appeal is heard.

Chief Justice Susan Denham said it was extraordinary that Dublin City Council had failed to show up at today's hearing.

Imposing the penalties for contempt of court earlier, Mr Justice Nicholas Kearns said he was taking into account the worry and disruption caused to the 247 residents who had to leave the complex.

Mr Justice Kearns also referred to the fact that Mr McFeely had disregarded fire safety issues at Priory Hall since 2008, and had a previous criminal conviction for fire safety there, for which he received a six-month prison sentence last April.

He said there had also been similar problems with an apartment complex he built in Clondalkin.

Judge Kearns said when even more serious breaches were discovered at Priory Hall, Mr McFeely had "held his hands up" and given an undertaking under oath in the High Court to carry out works by 28 November.

But the court heard he failed to progress works to take down bricks on external walls of the apartments and insert the required fire break material.

Mr McFeely was ordered off the site because there was no prospect of the works being completed by the deadline, but Mr Justice Kearns said there would be no "free exit pass" for faults that were so "egregious".

The judge said that he regarded as a "double contempt" the fact that Mr McFeely would not pay other contractors to carry out the works and he was satisfied that Mr McFeely did have access to funds.

The judge said the prison sentence for contempt would not stop further criminal prosecutions for the fire safety breaches by Dublin City Council or the DPP, and if Mr McFeely did not pay the €1m fine by next March he could face further action by the High Court.

Speaking after the court hearing, Graham Usher, a spokesman for the residents, said they were satisfied that finally someone other than them was being punished for "this mess".

"Tom McFeely recklessly endangered our lives and the lives of our own children just to line his pockets," Mr Usher said.

But he said Dublin City Council and the Government still needed to find a long-term solution, as residents faced being homeless this Christmas and many are paying mortgages for unsafe apartments. 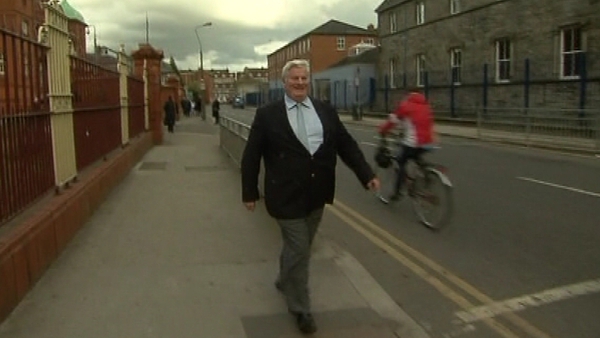