It was his first official engagement since those on his inauguration day on Friday.

The President laid a laurel wreath in remembrance of those who gave their lives in both of the world wars at the service.

Britain’s Queen Elizabeth laid a wreath at the Cenotaph in London this morning as part of Remembrance Sunday events there.

One of the biggest events was in Belfast where the Royal British Legion created a Field of Remembrance in the grounds of Belfast City Hall.

Northern Ireland First Minister Peter Robinson and Secretary of State Owen Paterson were among those who attended the wreath-laying service.

New SDLP leader Alasdair McDonnell also attended, although his decision not to wear a poppy caused some controversy.

His predecessor Margaret Ritchie was the first nationalist leader in Northern Ireland to wear the symbol when she attended the service last year.

A two-minute silence was observed at 11am.

President Higgins travelled to Derry to present the winning trophy to the All Island School Choir of the Year, Wesley College. 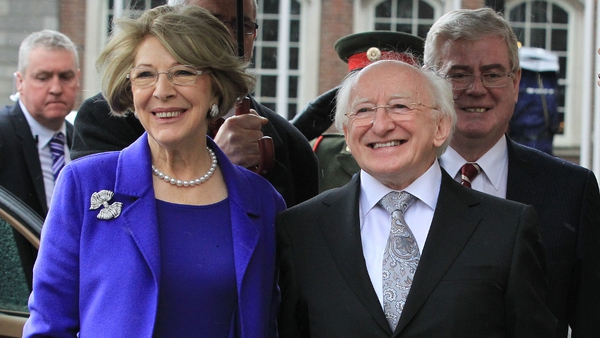