Michael D Higgins has been inaugurated as the ninth President of Ireland.

In a colourful ceremony at Dublin Castle, Mr Higgins made his Declaration of Office and received his Presidential Seal from the Chief Justice Mrs Justice Susan Denham.

Michael D Higgins and his wife Sabina arrived at Dublin Castle from Farmleigh House in the Phoenix Park with an Army motorcycle escort just before 11.45am.

They entered the historic St Patrick’s Hall and took their place on the platform - surrounded by the Taoiseach, Government Ministers and the Council of State, including former Presidents Mary Robinson and Mary McAleese.

After an inter-faith service and a humanist reflection, Mr Higgins made the Declaration of Office in Irish - promising to maintain the Constitution and uphold its laws.

He then received his Seal of Office.

During the ceremony, Taoiseach Enda Kenny described Mr Higgins as a "noble man of quiet virtue" who would be a President for all the people.

In his first address as Uachtaráin na hÉireann, Mr Higgins said the Irish people have the capacity to transcend the present difficulties.

He said we have been left wounded as a society, but he said people wanted to move on to a new chapter based on a new sense of Irishness.

1,700 guests were invited to a State reception at Dublin Castle tonight to celebrate the inauguration.

1347 Michael D Higgins has arrived at Áras an Uachtaráin for the first time as President. He has granted permission for the motorcade to be dismissed.

1329 They won't have to wait long now. The Presidential motorcade has just left Dublin Castle.

1327 Meanwhile, members of the press (including RTÉ's Sinéad Crowley) wait patiently at Áras an Uachtaráin. 1317 The President and his wife greet some of the schoolchildren present.

1314 There is heavy rain and Mr Higgins' aide-de-camp has held an umbrella over the President. As the troops march out of the yard, Mr Higgins uses a handkerchief to wipe rain from his suit sleeve.

Hundreds of schoolchildren have been watching outdoors during the military ceremony. There was also a fly-past by the Air Corps.

1307 The Presidential party moves to the Portico in Dublin Castle. Mr Higgins meets the Captain of the Guard of Honour before carrying out an inspection as the Army Band plays.

1302 The President of the European Commission, José Manuel Barroso, has sent a message of congratulations to Michael D Higgins.

On behalf of the European Commission, I would like to offer you my warmest congratulations on your inauguration as President of Ireland.

"You are taking office at an important time, as Ireland takes resolute action to address difficult economic circumstances and in doing so, is setting an example for other countries facing similar challenges.

"I look forward to meeting you during the Irish Presidency of the European Union in 2013. Guím gach rath ort le linn do thréimhse mar Uachtarán na hÉireann."

1256 President Higgins and his wife Sabina begin making their way out of St Patrick's Hall.

1251 President Higgins says we will strive to create an Ireland our children will not feel obliged to leave and one which will attract our diaspora to return to.

1245 "We must seek to build together an active, inclusive citizenship."

1243 His Presidency will be one "of transformation" and "of ideas".

1242 We must create the conditions to allow for the "flowering of creativity in all its forms".

1241 The new head of state wants to open "a new chapter based on a different version of our Irishness".

1239 Mr Higgins enters the office with a "sense of humility but also with confidence in the great capacity of our people". The President pays tribute to his two immediate predecessors, who are "two great women".

1237 A fanfare sounded in St Patrick's Hall after the declaration, and some distance away at Collins Barracks a 21-gun salute welcomed the new President.

1233 Enda Kenny says Michael D Higgins is "a noble man of quiet virtue". Mr Kenny says President Higgins will be a "healer" who has always worked on behalf of the marginalised.

1232 President Higgins is presented with the President seal.

1230 Michael D Higgins has signed the Declaration and officially becomes the ninth President of Ireland. The Declaration was read aloud by Chief Justice Mrs Susan Denham.

1225 Following the Service of Prayer, Susie Kennedy of the Humanist Association in Ireland, said the President should continue to promote inclusiveness, equality and diversity where people of all backgrounds with an ethical outlook can play an equal role in forming a fair society.

1222 The Humanist Association also gets the opportunity to speak, an innovation prompted by President-elect Higgins.

1210 The President of the Methodist Church in Ireland, Rev Ian D Henderson, is next to the microphone.

1200 The Service of Prayer begins.

1156 The crowd sits before rising again as Michael D Higgins and Eamon Gilmore enter the hall. 1154 The crowd rises as Enda Kenny enters the hall followed by a host of political and religious leaders.

1145 As we said, a miserable day in Dublin (weather wise anyway). 1142 Those pictures must have been from a few minutes ago. The motorcade has entered Dublin Castle. Tánaiste Eamon Gilmore greets Mr Higgins and his wife Sabina. 1140 The Presidential motorcade has just passed Collins Barracks on the north quays.

1139 Former Irish Times Editor Geraldine Kennedy says Higgins has been a "maverick" throughout his political career and that his Presidency is likely to be "interesting".

1134 Taoiseach Enda Kenny arrives at Dublin Castle. Bryan Dobson says that umbrellas are getting "plenty of use" today. It is a miserable day in the capital.

1130 The ceremony at Dublin Castle is quite a formal occasion and weeks of detailed planning have gone into the organisation of todays inauguration.

1128 Live coverage is now available by clicking on the link at the top of the page.

1127 President-elect Michael D Higgins has left Farmleigh House in the Phoenix Park and is being escorted by 29 military motorcyclists.

1117 Senator David Norris arrives at Dublin Castle. A number of the other beaten candidates, the Cabinet and former presidents Mary McAleese and Mary Robinson are also in attendance. 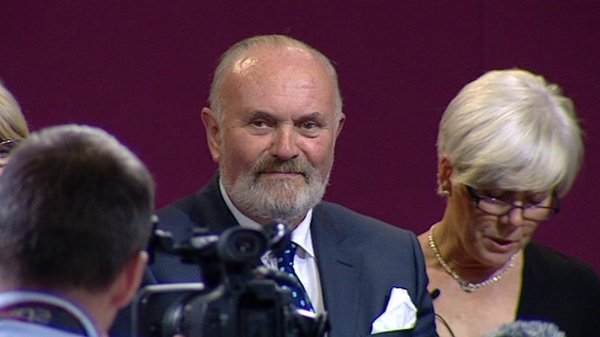