News Corp Chief Executive Rupert Murdoch has said his company has handled the phone hacking controversy 'extremely well' and will recover from its current difficulties.

Speaking to the Wall Street Journal newspaper, which is owned by News Corp, Mr Murdoch said the company had only made 'minor mistakes'.

He also said his son James, who is deputy chief operating officer of News Corp and non-executive chairman of BSkyB, had acted as fast as he could to revelations.

Earlier Rupert and James Murdoch bowed to pressure from British MPs and agreed to appear before the House of Commons committee investigating the News of the World phone-hacking scandal.

James Murdoch wrote to the Commons Culture, Media and Sport Committee to confirm they would both give evidence next Tuesday, having previously said they were unavailable to attend.

Their refusal had prompted the committee to issue summonses - served by the House of Commons Deputy Serjeant at Arms - ordering them to appear.

The Leader of the House, George Young, confirmed that - in theory at least - they could be fined or even imprisoned if they failed to turn up.

In his interview with the Wall Street Journal Rupert Murdoch said they had decided to attend the meeting so they could be 'as transparent as possible.'

'We think it's important to absolutely establish our integrity in the eyes of the public,' he said, adding that he wanted to address 'some of the things that have been said in parliament, some of which are total lies.'

The Murdochs' decision to accede to the MPs' demands came little over 24 hours after they dropped their takeover bid for BSkyB in the face of overwhelming opposition from Parliament.

The News Corp chairman and chief executive and his son, who is the organisation's deputy chief operating officer, will appear alongside Rebekah Brooks, the chief executive of News International, which published the News of the World.

However, in his letter to the committee, James Murdoch urged members not to cut across the police inquiry in their questioning.

'We have been advised that, in the light of the fact that there are to be multiple reviews of the issues, this does carry the risk of prejudicing other judicial proceedings and in particular the ongoing police investigation and any potential subsequent prosecutions,' he wrote.

'I would therefore respectfully ask you to take the utmost care in ensuring that the committee hearing does not run any risk of prejudicing that investigation and subsequent prosecutions.'

Meanwhile, former News of the World executive editor Neil Wallis has reportedly been arrested over phone hacking at the newspaper, according to some media reports.

Mr Wallis, aged 60, was held at his home in west London by detectives from Operation Weeting, the Scotland Yard investigation into mobile interceptions by the Sunday tabloid.

He became deputy editor of the News of the World in 2003 and served under Andy Coulson's editorship before becoming the paper's executive editor in 2007.

The FBI will probe allegations that Mr Murdoch's News Corp hacked into the phone records of victims of the 11 September attacks.

'We are aware of the allegations and we are looking into it,' a spokeswoman from the FBI's New York office said.

Earlier, members of US Congress stepped up calls for investigations into whether employees of News Corp broke US law in trying to gather information about US citizens.

'The 9/11 families have suffered egregiously, but unfortunately they remain vulnerable against such unjustifiable parasitic strains. We can spare no effort or expense in continuing our support for them,' he said in a letter to Mr Mueller.

'Any person found guilty of this purported conduct should receive the harshest sanctions available under law,' said Mr King, who represents a New York district that was home to more than 150 of those killed in the attacks.

The politicians, who chair the US Senate's Commerce and Environment and Public Works committees, respectively, also cited the reports that Murdoch employees targeted the phones of victims of the 11 September 2001 terrorist strikes.

'The reported allegations against News Corporation are very serious, indicate a pattern of illegal activity, and involve thousands of potential victims,' the lawmakers said in a letter to Mr Holder and Ms Schapiro.

Mr Murdoch dramatically dropped his bid for control of pay-TV giant BSkyB yesterday, with News Corp saying it was now ‘too difficult to progress in this climate'

British Prime Minister David Cameron welcomed the news, saying the Australian-born tycoon should focus on cleaning up his business after the scandal, which forced the closure of the News of the World tabloid on Sunday.

In parliament yesterday Mr Cameron also announced the details of a full public inquiry into phone hacking, which he said would also include links between politicians and the press. 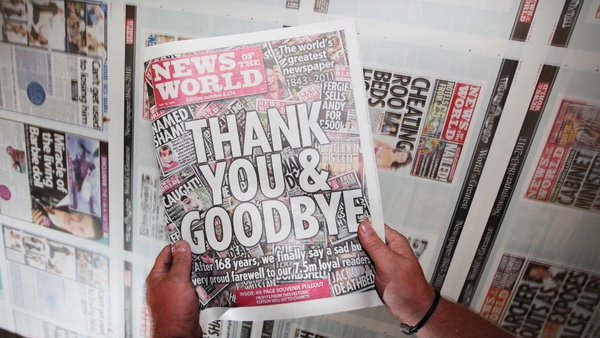 Final edition of News of the World printed News