There was further rioting in north Belfast overnight after the return of a 12 July Orange Order parade through the Ardoyne area.

Several police officers were injured and a press photographer was hit by a baton round.

The area was said to be calm by 2am.

‘Whilst I commend the bravery and leadership of many within the community who worked tirelessly to reduce the disorder and calm tensions - we need everyone to keep working to build and maintain calm across all local areas.

‘My colleagues are working around the clock to protect the community right across Northern Ireland and we have sufficient resources in place to do this.’

He said the policing operation in Ardoyne was ‘proportionate’ and confirmed that several officers were injured.

‘My colleagues have acted with great professionalism to keep communities safe under very difficult circumstances,’ he added.

A number of arrests were made on suspicion of riotous behaviour, including of juveniles.

‘These people have been intent on attacking the police and wreaking havoc in their own community,’ he said.

‘Such violence is senseless and has clearly nothing to do with protesting against a parade but is just futile rioting,’ he said.

‘Residents in the area are the ones who suffer the most with people feeling trapped in their own homes, scared to go out. Bus services are also affected in the area which the vulnerable rely upon,’ he said.

‘This trouble is putting Northern Ireland in the headlines around the world for all the wrong reasons.'

The 12 July celebrations by Orangemen involved tens of thousands of members of the loyal orders walking the streets to commemorate the 1690 Battle of the Boyne victory of Protestant King William III over Catholic King James II. 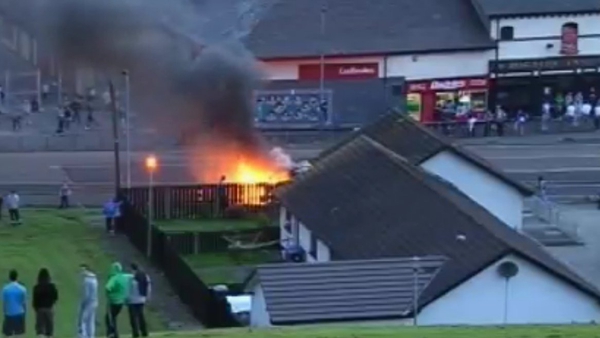