Violence has flared across Northern Ireland tonight, with the PSNI deploying water cannons after disturbances in north Belfast, Derry and Ballymena, Co Antrim.

Police have confirmed that several officers had been injured and vehicles were hijacked.

Up to 100 petrol bombs are reported to have been fired at police.

In Derry, crowds gathered in the Free Derry Corner and Fahan Street areas and a van was set altight. Police arrested a 14-year-old boy on suspicion of riotous behaviour and have recovered a crate of petrol bombs.

Youths burned tyres and hijacked a car and set it alight in Armagh. There were also disturbances in Newry, Co Down, this evening when youths threw stones and set tyres on fire.

A local photographer was hit by a baton round in Ardoyne.

The street disturbances occurred when a nationalist splinter faction was barred from completing a protest to coincide with an Orange Order parade through the area.

A controversial 12 July Orange Parade in Ardoyne in Belfast passed off without incident this morning.

The PSNI said: 'The policing operation in North Belfast tonight will be appropriate and proportionate.'

Crowds of up to 200 nationalists threw over 40 petrol bombs and masonry at officers in riot gear.

There were 51 plastic baton rounds fired in the Broadway and Oldpark areas of the city when police lines came under attack.

The trouble flared during loyalist celebrations to mark the height of the marching season.

The emergency services in Northern Ireland received a total of 180 fire calls over a seven-hour period up until 1am, representing a 65% increase over the same period last year.

At the peak of activity, they were processing one call every 75 seconds with the majority of these from within the greater Belfast area.

The majority of the demonstrations passed off without incident.

In Dublin, President Mary McAleese marked her last 12 July in office, with a garden party at Áras an Uachtaráin for several hundred guests from both sides of the border.

Elsewhere, a number of people had to leave their homes for a time early this morning in north Belfast following reports of a suspicious vehicle in Ballysillan.

British army bomb experts were called to the scene at Glenbryn Parade at around 12.30am.

The alert was later declared a hoax and local residents were allowed to return home. 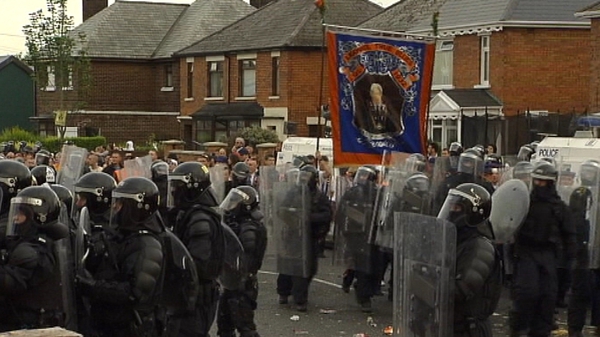