Former Bosnian Serb military commander Ratko Mladic has described the charges of genocide and war crimes made against him as 'monstrous' and 'obnoxious'.

Mr Mladic was speaking during his first appearance before a United Nations war crimes tribunal at The Hague in the Netherlands.

He refused to enter any plea and told the court that he was a 'gravely ill' man.

Mr Mladic also said he defended his people and his country in the Bosnia war and now intended to defend himself against war crimes.

'I did not kill Croats as Croats, I was just defending my country,' he said.

The hearing has been adjourned until 4 July.

Mr Mladic stands indicted on 11 counts, which include genocide, persecution, extermination, deportation and unlawful acts, such as the siege of Sarajevo and taking UN personnel hostage.

As the indictment was being read out, Mr Mladic shook his head several times and described the charges as 'monstrous'.

He said he needed much longer than the month proposed by the court to consider the charges.

'I need at least two months to read those binders (provided by the prosecution), if not more,' he said.

Judge Orie said: 'The purpose of the hearing is to inform you of the charges against you and to ask for your entry of a plea, as well as to verify that your right to counsel is respected.'

'It will take some time before the trial itself will start,' he added. The judge also advised Mr Mladic of his right to remain silent.

Mr Mladic was extradited to the Netherlands from Serbia on Tuesday following his arrest last week.

He is accused of masterminding the Srebrenica massacre, where more than 7,000 men and boys were killed.

The 69-year-old, who has suffered several strokes and lost the power in one arm, was taken to a prison hospital yesterday.

However, his lawyer Aleksandar Aleksic said that while Mr Mladic's health had deteriorated, he was mentally capable and responsive.

Earlier this week, the chief prosecutor Serge Brammertz said Mr Mladic's capture had come 'very late but not too late' for justice to be done.

Axel Hagedorn, a lawyer who represents mothers of the victims of the Srebrenica massacre, said Mr Mladic's court appearance brought back many of their painful memories. 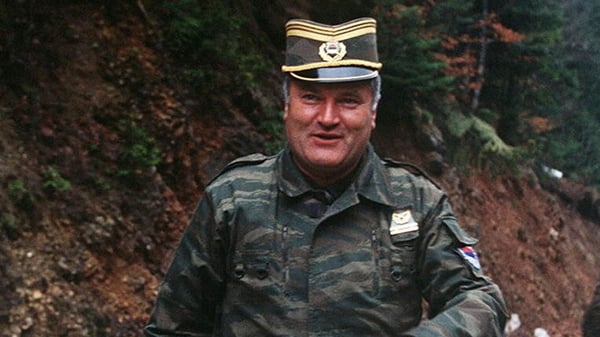