Former military chief Ratko Mladic has appeared in court, hours after his arrest in Serbia ended a 16-year manhunt for the general accused of masterminding the 1995 Srebrenica massacre.

Europe's most-wanted man was arrested in the early hours of Thursday in a village in northern Serbia, but there were immediately questions over whether 69-year-old Bosnian Serb was fit to stand trial after he claimed to be ill.

‘The extradition process is under way,’ he added, referring to the process to transfer Mladic to the International Criminal Tribunal for the former Yugoslavia (ICTY), a UN tribunal based in The Hague.

The indictment against him cites the establishment of camps and detention centres for Bosnian Muslims as part of a campaign of ethnic cleansing during the 1990s war, as well as the Srebrenica massacre and the 44-month siege of Sarajevo.

At Srebrenica, 8,000 Muslim men and boys were rounded up and massacred in Europe's worst atrocity since World War II.

But Mladic's first appearance before the Serbian war crimes court was halted as his lawyer said he was unable to communicate.

‘The investigative judge tried to question Ratko Mladic but he failed because he (Mladic) is in a difficult psychological and physical condition,’ lawyer Milos Saljic told reporters.

‘It is difficult to establish any kind of communication with him,’ he said, adding that Mladic had however confirmed his identity.

Deputy war crimes prosecutor Bruno Vekaric confirmed the hearing was stopped but refused to comment on the reasons, and disputed the assessment that Mladic was unable to answer simple questions.

Vekaric had earlier said it could take up to seven days before Mladic is handed over to the ICTY.

Mladic is to undergo medical evaluations and doctors are to report on Friday whether he is capable of appearing in court, said Saljic, who added he believed the former general was fit to be transferred to The Hague.

Mladic, the ICTY's most-wanted fugitive, faces charges of genocide, crimes against humanity and war crimes for his role in the Srebrenica massacre and the bloody siege of Sarajevo during the 1992-1995 conflict.

Hundreds of ultra-nationalists protested his arrest in Serbia and authorities said two people were wounded in a clash with police. Many Serbians consider Mladic a hero.

Police said security was tightened across the country following the arrest.

Tadic would not say how and where Mladic was arrested other than that he was captured on Serbian soil.

But Serbian security sources said three special units swooped in the early hours of Thursday on a house in Lazarevo, a village around 80km north of Belgrade, close to the Romanian border.

The house was owned by a relative of Mladic and had been under surveillance for the past two weeks, one of the sources added.

‘It is not true that he was using a fake identity. When he was arrested we found only one expired ID and a military ID card in his name,’ Dacic told RTS state television.

He said Mladic was armed with two guns ‘but he did not have the time to use them’.

Mladic’s arrest follows heavy pressure from the European Union which made clear that Serbia’s failure to capture Mladic was a major obstacle to its hopes of joining the 27-nation bloc.

In Brussels officials reacted with delight but stressed they wanted to see Mladic in The Hague as soon as possible.

‘Justice has been served and a great obstacle on the Serbian road to the European Union has been removed,’ Enlargement Commissioner Stefan Fuele said.

French President Nicolas Sarzoky, hosting a G8 summit in Normandy, said it was ‘another step towards Serbia joining (the EU) one day soon’.

US President Barack Obama applauded Tadic for his ‘determined efforts’ to ensure that Mladic face justice.

The Bosnian Serb wartime political leader Radovan Karadzic, Mladic's mentor who was captured in July 2008 and is on trial in The Hague, was said to be ‘sorry for General Mladic's loss of freedom,’ according to his lawyer. 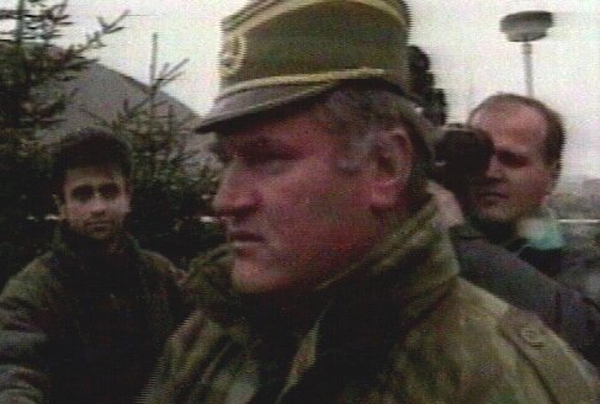