Tánaiste and Minister for Foreign Affairs Eamon Gilmore has said he was ‘absolutely disgusted’ by Real IRA threats to kill more PSNI officers.

Yesterday, 300 people attended a function where a masked member of the Real IRA addressed a crowd in a Derry cemetery.

The rally was reported to have been organised by the 32 County Sovereignty Movement to mark the anniversary of the 1916 Easter Rising.

The statement read: 'Despite the best efforts of the media, big business and other power blocks to portray this visit as acceptable, we clearly state that the Irish people will not capitulate.

'The Queen of England is wanted for war crimes in Ireland and not wanted on Irish soil. We will do our best to ensure she and the gombeen class that act as her cheerleaders get that message.'

In the statement, the Real IRA said police officers would be targeted.

'Oglaigh na hEireann (the IRA) call on any young nationalist who may have been sold the lie that the RUC/PSNI (Royal Ulster Constabulary/Police Service of Northern Ireland) is somehow an reformed, non-political police service to think again, those who think they are serving their community are in fact serving the occupation and will be treated as such,' it said.

Mr Gilmore, who was meeting Irish-American Congressman Richard Neal in Dublin, said dissidents had no support, north or south.

‘They have no mandate,’ he said.

‘The arrangements in this country have been settled by the Good Friday Agreement, been voted on by the people of this country and nobody has any right to challenge that in the way that these people are doing.

‘The Government is absolutely determined that they will not succeed.’

Mr Gilmore said the threats were menacing and had no place in the Ireland of today.

The Tánaiste welcomed an offer by Derry Catholic priest Father Michael Canny to meet and talk with dissidents.

‘If there is anybody who can persuade these people away from the path that they are on and the threats that they are making, then certainly I would welcome that.

‘And I would hope that that would be helpful.’

Speaking on RTÉ's Morning Ireland, Fr Canny said every effort should be made to engage with dissidents.

Speaking on RTÉ's News at One, Northern Ireland Deputy First Minister Martin McGuinness said we should be confident about the future, because the unity of all of the elected representatives in the island of Ireland, supported by the entire community, sends a message to armed groups that they have no prospect of achieving their objectives.

He condemned as 'cowards who are afraid to face the electorate' those responsible for attempting to de-stabilise the peace process.

Fianna Fáil Leader Micheál Martin, TD, has described the latest threats against the PSNI as cowardly and senseless.

Micheál Martin has said that 'yesterday's threat from the Real IRA is further evidence that terrorist gangs have no respect for the sovereign wishes of the Irish people.

Mr Martin continued, these deluded criminals fail to comprehend the true meaning of republicanism and quite clearly have nothing but contempt for this country and its people.'

Meanwhile, a security alert in Belfast city centre has ended after army bomb experts were called to examine a suspicious object at a police station which had initially been examined 12 April.

The package had been removed from Tomb Street sorting office.

The object was similar in nature to a number of suspect packages currently under investigation by Strathclyde police in Scotland.

Victoria Street was closed for a time while army technical officers checked a device at Musgrave Street PSNI Station.

The device was re-examined after police received additional information. 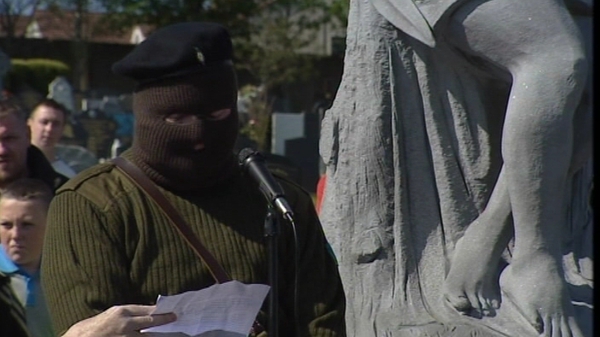