The Moriarty Tribunal has found that the former Communications Minister Michael Lowry assisted businessman Denis O'Brien in acquiring a mobile telephone licence in the mid-90s.

The second and final report from the Tribunal of Inquiry concluded it was ‘beyond doubt’ that Mr Lowry gave what it termed ‘substantive information to Denis O'Brien, of significant value and assistance to him in securing the licence’.

The Tribunal report found that Mr Lowry displayed ‘an appreciable interest’ in the process and had ‘irregular interactions with interested parties at its most sensitive stages’.

It also found that Mr Lowry sought and received substantive information on emerging trends and made his preferences on the leading candidates known.

Mr Lowry proceeded to bypass consideration by his Cabinet colleagues and thereby not only influenced, but delivered the result that Esat Digifone had won the evaluation process - which ultimately led to the licensing award.

The report describes these matters as elements of Mr Lowry's ‘insidious and pervasive influence’ on the process.

The ‘most pervasive and abusive instance’ of Mr Lowry's influence on the awarding of the licence was his action in withdrawing time from the Project Group, when it had requested an extension to its work because it was not convinced that Esat Digifone should be nominated as the winner.

The project group had asked for extra time because it was confused about the weightings applied and how the result had emerged. The group wanted an opportunity to revisit and review the evaluation.

The tribunal found that Mr Lowry sought to procure unwarranted rent increases that over a seven-year period would have improperly enriched businessman Ben Dunne.

Mr Lowry sought to influence the outcome of an arbitration being conducted in 1995 in relation to the rent payable by Telecom Eireann for Marlborough House to a company owned and controlled by Mr Dunne.

The matter was ‘profoundly corrupt to a degree that was nothing short of breathtaking’.

Mr Dunne has rejected the findings and has insisted he is not a corrupt businessman, he has said if the Tribunal feels he acted outside the law it should forward a file to the Director of Public Prosecutions so that the DPP could consider action.

He told RTÉ's Liveline that he would not run away from the allegations in the report and would defend himself.

The report comments on documents in the possession of Esat Digifone ,which were 'never intended to any applicant'.

The documents were confidential correspondence between Mr Lowry and EU Commissioner Van Meirt.

The documents had made their way to the tribunal via Jarleth Burke who had represented Mr O'Brien's interests in dealing with the Commission and the Department.

The Tribunal said they were documents that Mr Burke had 'no business having in his possession'.

The documents contained 'sensitive information' on the weighting adopted by the project group.

Moriarty was unable to conclude how the information on the weighting matrix adopted by the project group was obtained by the company.

The report also summaries the cumulative payments made to Michael Lowry and says ‘In aggregating the known payments from Mr Denis O Brien to Mr Michael Lowry, it is apposite to note that, between the granting of the second GSM licence to Esat Digiphone in May 1996, and the transmission of £420,000 sterling to complete the purchase of the latter of Mr Lowry's English properties in December 1999, Mr O'Brien had made or facilitated payments to Mr. Lowry of £147,000 sterling, £300,000 sterling and a benefit equivalent to a payment in the form of Mr O'Brien's support for a loan of £420,000 sterling.’

The report adds that the value of the sums mentioned 'in today's terms, is obviously well in excess of the amounts transferred at the various times mentioned in this Report'.

During the period of the competition for the mobile phone licence and subsequent licensing negotiations, Mr O'Brien or his companies supported 14 Fine Gael fundraising events, and contributed a total of £22,140 by way of donations to Fine Gael.

Mr Lowry displayed ‘an appreciable interest’ in the process and had ‘irregular interactions with interested parties’ at what it terms ‘most sensitive stages’.

The report says it ‘finds it wholly incredible and inconceivable’ that the GSM process was not raised and discussed at informal meetings between Mr Lowry and Mr O'Brien.

The Tribunal says it ‘rejects the evidence’ of both men regarding a meeting they held in a Dublin pub after an all-Ireland final in 1995.

In a statement today, Denis O'Brien said that the report was 'fundamentally flawed' because he said it is 'based on the opinions and theories of Mr Justice Michael Moriarty and his legal team’.

Mr O'Brien insisted that he never made any payment to Mr Lowry in his capacity as a Government Minister, as a public representative or as a private citizen.

Mr Lowry is not in the country at the moment, but in a statement issued to RTÉ News said he 'totally rejects the tenor of the Moriarty report'.

He said Mr Moriarty has 'outrageously abused the Tribunals ability to form opinions which are not substantiated by evidence or fact'.

He said that the report has no basis in law and he said he would study it in detail and in due course challenge its veracity.

Businessman Dermot Desmond tonight accused the Moriarty Tribunal of bias and said it has been prejudicial from the outset.

Mr Desmond helped to finance Mr O'Brien's bid but was not under investigation over the granting of the licence.

'The Tribunal because of the length of time it has taken, and the cost of its investigations, has now a vested interest in achieving a 'result',' he said.

'This Tribunal has rejected evidence where it did not suit its end and has described reputable witnesses appearing before it in disparaging terms.

'From the outset it is my belief that the Tribunal has been prejudicial in its approach.' 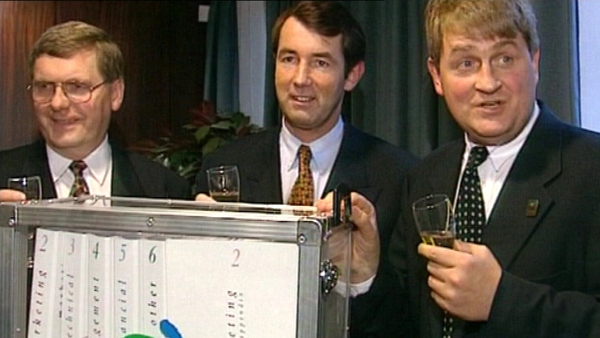