Political leaders have been outlining their main policies as the General Election campaign approaches an end, with Fine Gael leader Enda Kenny promising his party will hit the ground running if elected to government, while Fianna Fáil leader Micheál Martin has attacked Fine Gael's five-point plan.

Mr Kenny said Ireland urgently needs to get back to work and that Fine Gael has a comprehensive strategy for the first 100 days.

The Labour leader Eamon Gilmore said what's needed now was 'a national effort' to get reform of the economy, the constitution and the health service over the next five years.

The conferences were held as the final opinion poll of the campaign showed Fine Gael still on course to lead the next Government.

Labour leader Eamon Gilmore said he expected Labour to do better than the polls predict on Friday, while Fianna Fáil leader Micheál Martin said the voters should not be taken for granted.

He added that a clear message would be sent to Europe and the world that a strong and stable government is in charge; and that his party had identified where it would make the €6bn in cuts it has proposed.

Mr Gilmore said he expected Labour to do better than the polls are predicting, urging people who are thinking of voting for Independents or smaller parties to vote for Labour instead, if they do not want to see a single-party government.

At his final campaign media event in Dublin, Sinn Féin President Gerry Adams urged people to make a stand and vote for his party.

Increase of 50,000 on Supplementary Register

There has been an increase of about 50,000 people on the Supplementary Electoral Register.

It is understood that preliminary figures show an increase across the country.

The register was published on 1 February last and came into effect on February 15.

While some of the 50,000 may have been added to the Register before 1 February, officials believe the vast majority registered to vote since that date.

In 2008 around 18,000 people were added to the register, although this was outside of an election period.

Reacting to the final poll of the General Election, Mr Kenny said trends in polls are important but the real poll is on Friday.

Mr Kenny said it was the first time he could recall that Fine Gael had been at that level.

However, he said his message to his candidates and canvassers was that he did not want any sense of complacency and he expected them to work until 10pm on Friday, as he would be doing.

He said there was an encouragement around the country based on the fact that Fine Gael had set out a costed and credible plan for the way forward.

Speaking at his party's headquarters in Dublin this morning, Eamon Gilmore said Labour would look out for families, people who have lost their jobs and families who have difficulties with mortgage payments.

Earlier, Fianna Fáil leader Micheál Martin said that a vote for his party on Friday would not be wasted, despite polls indicating that Fianna Fáil will not be a part of the next Government.

Speaking on Morning Ireland, Mr Martin said Fianna Fáil would be represented in the next Dáil and make a decisive contribution.

Elsewhere, the first votes in the General Election were cast on islands off the coasts of Co Mayo and Donegal.

Voting has finished on the four smallest Donegal islands and on Arranmore.

There was a turnout of around 50% on Tory Island, but only 15 people out of 67 registered on Innishboffin cast a vote.

Many of them had travelled two the island from the mainland where they spend the winter months. 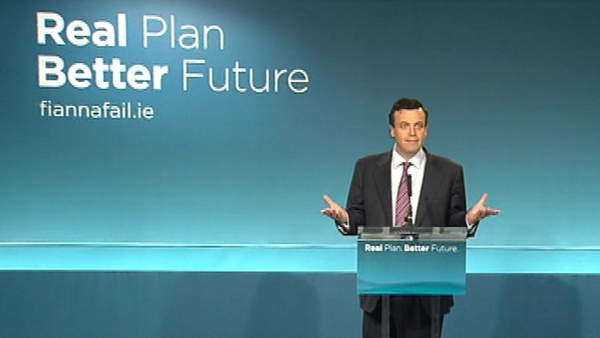