Six men are now being questioned by police in London following reports of a threat to Pope Benedict XVI.

A sixth man was arrested during the day, but it is not clear if he works for the same cleaning company contracted by the Westminster area of London.

Officers searched a business in central London and homes in the north and east of the city - no weapons or bomb-making equipment have been found.

'Following today's arrests the policing arrangements for the Papal visit were reviewed and we are satisfied that our current policing plan remains appropriate,' a statement said.

The Pope's itinerary has not been changed, with Vatican officials saying it is business as usual.

Pope Benedict spent the second day of his state visit to Britain in London.

He spent last night at the papal nuncio's residence at Wimbledon, south London, having flown from Glasgow.

He spent the morning at St Mary's University College in Twickenham meeting teachers and students, as well as representatives of religious congregations.

The Pope discussed celebrity culture during his address to schoolchildren and told them that money and fame was not enough to make them happy.

This afternoon, he travelled to Lambeth Palace in central London for discussions on inter-church relations with Archbishop of Canterbury Dr Rowan Williams.

Relations with the Anglican church have become more strained since the Pope's offer to ease the conversion to Catholicism of conservative Anglicans who oppose the ordination of women bishops.

In his keynote address at Westminster Abbey this evening, the Pope said the lack of a solid ethical foundation for economic activity had contributed to grave difficulties being experienced by millions of people throughout the world.

He also praised a long history of democracy in Britain and said he hoped church and state could work together.

Mr Cameron attended the funeral of his father and will meet the Pope for talks tomorrow. 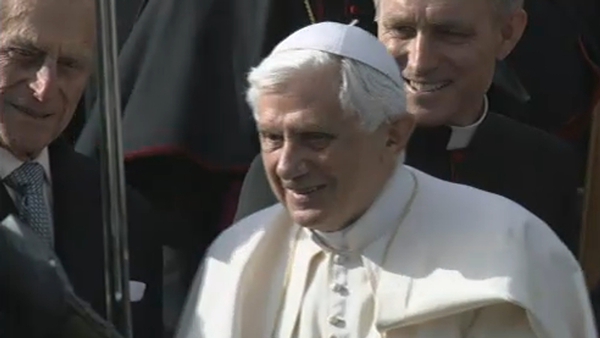