Pope Benedict XVI has described the abuse of children by Irish clergy and religious as 'sinful and criminal'.

In his pastoral letter to Catholics in Ireland, the Pope said he was 'truly sorry' for the abuse victims and their families suffered in the Church's name and expressed shame and remorse.

The letter will be read out at all Masses this weekend.

The Pontiff mentioned in particular those abused in religious institutions and said it was understandable that they find it hard to forgive or be reconciled with the Church.

The Pope said serious mistakes were made in Ireland when the Church responded to allegations of child sexual abuse.

In the letter, the Pontiff said some bishops had failed 'at times grievously' to apply canon law to the crime of child abuse.

Benedict said errors of judgement and failures of leadership had undermined the credibility and effectiveness of Irish bishops.

The Pontiff said that for the Church in Ireland to recover from 'this grievous wound', it must acknowledge the serious sins committed against defenceless children.

He said sincere sorrow for the damage caused to the victims and their families must lead to a concerted effort to protect children from similar crimes in the future.

The Pope said the current crisis could be attributed to the poor vetting of candidates for vocation, and the tendency to 'favour the clergy and other authority figures.'

He ordered an inspection of Irish churches and seminaries with a view to introducing new regulations in an attempt to curb perceived abuses. He also said there was a 'misplaced concern' to protect the Church and avoid scandal.

Addressing priests and religious who had abused children, he said they had betrayed the trust placed in them by innocent young people and their parents.

He said: 'You must answer for it before Almighty God and before properly constituted tribunals.'

He urged abusers to examine their conscience and take responsibility for the sins they had committed. This would open the door to 'God's forgiveness'.

However, there was no reference as to whether or not bishops should resign for past failures to protect victims.

Pope Benedict said Catholics should reflect on what he called 'Ireland's often heroic contribution' to the Church and to humanity so that it would lead to honest self-examination and renewal.

Cardinal Brady urged all Catholics in Ireland to take the time to read the letter.

After Mass in Armagh this morning, the Cardinal said: 'I welcome this letter. I am deeply grateful to the Holy Father for his profound kindness and concern.

'It is evident from the Pastoral Letter that Pope Benedict is deeply dismayed by what he refers to as 'sinful and criminal acts' and the way the Church authorities in Ireland dealt with them.'

Archbishop of Dublin Diarmuid Martin described the letter as 'a further step in the process of renewal and healing'.

He added: 'I welcome the Pope's expression of apology and his recognition of the suffering and betrayal experienced by survivors.

'The Pope recognises the failures of Church authorities in how they dealt with sinful and criminal acts.'

Speaking this evening at Dublin’s Pro Cathedral, Archbishop Martin said it would be much better for bishops who failed to adequately protect children to have their part in the scandal defused before damage is done.

The Conference of Religious of Ireland has also welcomed the contents of the letter, in particular the Pope's comments to victims and their families.

CORI Director General Sr Marianne O'Connor said: 'For all of us, this pastoral letter is an important part of the ongoing process of confronting the mistakes of the past, encouraging healing and reconciliation and ensuring that the safeguarding of children is an absolute priority at all times.'

Executive Director of One in Four Maeve Lewis has said they are disappointed by the letter and said it falls far short of addressing the concerns of victims of clerical abuse.

She said: 'Pope Benedict has passed up a glorious opportunity to address the core issue in the clerical sexual abuse scandal: the deliberate policy of the Catholic Church at the highest levels to protect sex offenders, thereby endangering children.

'The Pope speaks on only of failures in the Irish Church, and neglects the role of the Vatican. If the Church cannot acknowledge this fundamental truth, it is still in denial.'

'We are astounded at the Pope's assertion that the roots of clerical sexual abuse lie in the secularisation of Irish society, the falling off of religious devotion and failures to adhere to canon law.

'This shows a complete misunderstanding of the dynamics of sexual violence, and creates little hope that the Church will ever respond effectively to the problem.'

Abuse survivor Andrew Madden has said that on first reading the letter 'failed to address this issue at all seriously'.

In a statement Mr Madden said: 'The context is of course inappropriate, as by its very definition a pastoral letter is addressed only to practicing Catholics and so ignores many other people who may in some way have been affected by this issue.

'A pastoral letter is not the way to respond to the Ferns, Ryan & Murphy Reports detailing the rape, abuse and sexual abuse of children by priests and religious in this country and its cover up by Church authorities.

'As I had anticipated the letter also fails to address any of the issues raised by myself and others in our open letter to the Pope last month, in advance of the Irish Bishops' trip to Rome.'

However, Irish Survivors of Child Abuse spokesman John Kelly said there were a number of positives.

'It would appear that the message overall is one of sincerity to bring about change in the Church,' he said.

'We have an apology for the first time, and that's important.' 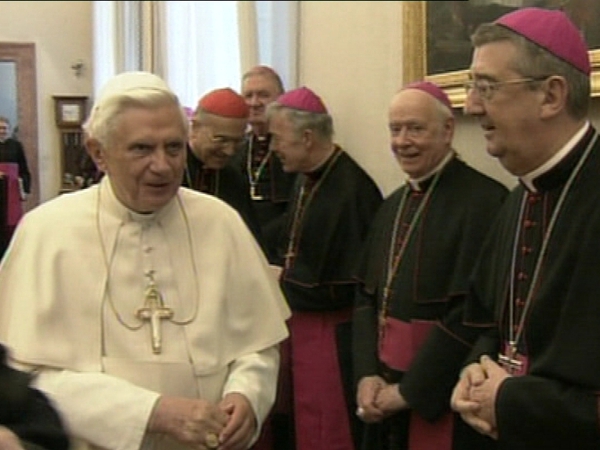