DUP leader Peter Robinson has said his party was encouraged by the progress made at talks on the devolution on policing and justice powers.

However, the First Minister said the negotiations have not been concluded as there are still some issues that have to be resolved.

Mr Robinson said the DUP intended to meet other parties and the British government tonight.

He said his party had committed itself to the process and it is determined to make the political institutions work.

It is understood that there may still be some concern within the party regarding how the proposed agreement will affect the issue of Orange Order parades.

The feeling is that the more hardline elements within the DUP are refusing to sign up to the agreement.

Sinn Féin and the DUP met for around an hour earlier today to discuss the proposals to break the deadlock.

Sinn Féin is ready to sign up to the deal, which was thrashed out between the two parties negotiating teams over the past week.

Gerry Kelly said they are close to agreeing a deal but that some issues still needed to be 'sorted out'.

PSNI Chief Constable Matt Baggott and chairman of the NI Policing Board Barry Gilligan arrived at Hillsborough Castle this evening for a progress report on the talks.

Taoiseach Brian Cowen and the British Prime Minister Gordon Brown are on standby to travel to Northern Ireland if the parties approve the proposed agreement.

Minister for Foreign Affairs Micheál Martin and Northern Secretary Shaun Woodward have been at Hillsborough Castle for most of today.

Earlier, SDLP leader Mark Durkan said he thought the prospects of an agreement being reached were good.

Speaking on Morning Ireland, Sinn Féin President Gerry Adams said the initial phase of the negotiations last week had been difficult, but he believed that progress was now being made with the DUP.

Mr Cowen cancelled a scheduled meeting with Spanish Prime Minister José Luis Zapatero in Madrid this afternoon to stay in touch with the Hillsborough negotiations.

There had been a sense of a new beginning in recent days in negotiations involving the two power blocs.

In the discussions between the DUP's Peter Robinson and Arlene Foster and Sinn Féin's Martin McGuinness and Gerry Adams, much of the talk was about responsibility to the wider public rather than a support base. 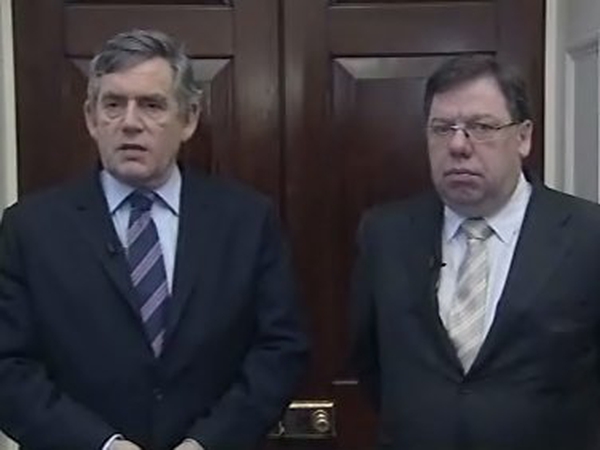