After three days of talks, Taoiseach Brian Cowen and British Prime Minister Gordon Brown have left Northern Ireland with the future of the power sharing assembly still in grave doubt.

Both leaders have given the main parties 48 hours to resolve their differences on the devolution of policing and justice powers, or else the two governments will publish their own proposals.

Northern Ireland Deputy First Minister Martin McGuinness said he was disappointed with the outcome of the talks, and blamed DUP demands for a concession on loyalist parades for blocking an agreement.

'I believe we have displayed extraordinary patience and commitment over the past 18 months as we sought to persuade the Democratic Unionist Party to be partners of progress,' said Northern Ireland Deputy First Minister Martin McGuinness.

'The decision by the DUP, at the behest of the Orange Order, to make the abolition of the Parades Commission a pre-condition for the transfer of powers on policing and justice flies in the face of all that.'

Speaking on RTÉ’s Six One, he said the reason for this is that he does not believe Peter Robinson 'has come up to the mark in terms of being prepared to respect and recognise the rights of nationalists and republicans to live in the north in the context of partnership and equality.’

Earlier, Gordon Brown said a 'pathway to agreement' has been reached in the Northern Ireland talks at Hillsborough Castle.

In a joint statement with Taoiseach Brian Cowen, he said that they have proposals that make for a 'reasonable settlement' that deals with all the outstanding issues.

Mr Brown said that they have looked at the issue of dates for devolution of policing and believe that this can be brought to a cross-party vote of the NI Assembly at the beginning of March, with devolution beginning in May.

He said the parties have now been asked to go away and discuss the proposals, and come back to them on Friday morning.

If progress has not been made by Friday, the proposals from the Taoiseach and British Prime Minister will be published.

The Taoiseach confirmed that a 'very detailed set of discussions' had taken place. He said progress had been made and that it was unfortunate that a deal had not been done.

Mr Cowen and Mr Brown later left Hillsborough Castle together in a convoy.

Overnight talks adjourned at 5.30am this morning.

There was speculation last night that the parties were edging towards an agreement that would see law and order powers transferred from Westminster to the Northern Ireland Assembly before the upcoming UK general election, while a compromise deal was being negotiated on a new system for overseeing Orange Order parades.

The talks were dramatically convened by the two prime ministers on Monday after the long-running row between the DUP and Sinn Féin over the stalled devolution of policing powers escalated to crisis point.

Republicans threatened serious consequences for the administration if the DUP did not agree to a swift transfer of law and order responsibilities from Westminster.

The DUP is demanding an end to the Parades Commission, which currently oversees marches in flashpoint areas such as the Garvaghy Road in Portadown, one of a number of Orange Order parades that had previously sparked violence. 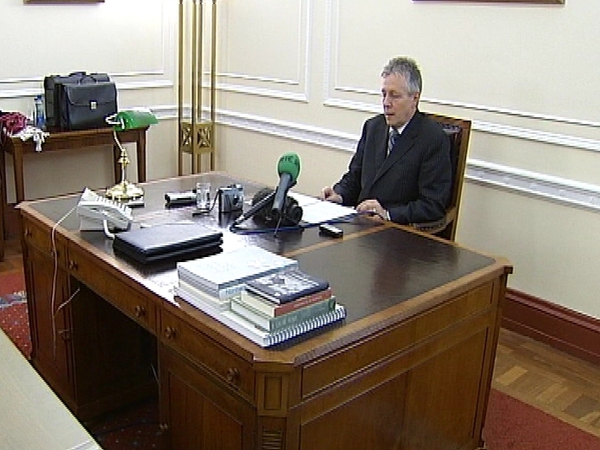