Former Taoiseach Albert Reynolds has been declared medically unfit to give evidence at the Mahon Tribunal because of cognitive impairment.

Mr Reynolds, whose appearance was postponed on a number of occasions this year, was due to be questioned about allegations of improper payments from Cork developer Owen O'Callaghan.

Tribunal chairman Judge Alan Mahon announced today that Mr Reynolds's GP and two consultants had told the inquiry he was unfit to give evidence.

The inquiry then got opinion from two other consultants and all five experts are of the unanimous opinion that Mr Reynolds is suffering from cognitive impairment.

Chairman Mahon said Mr Reynolds will not now be scheduled to give evidence but the inquiry reserves the right to review its decision if there is a change in his condition.

Tom Gilmartin testified to the tribunal that Mr O'Callaghan claimed to have paid Mr Reynolds £150,000 in March 1994. Mr Reynolds has described this allegation as nonsense.

The tribunal heard that Mr Reynolds was at a dinner organised by Mr O'Callaghan in a private house in Cork at that time which raised £50,000 for Fianna Fáil.

The tribunal also heard evidence last year from the head of the Air Corps, Brigadier General Ralph James, that Mr Reynolds afterwards left for a St Patrick's Day trip to the US and later made an unscheduled stop to the Bahamas.

The chairman of the Mahon Tribunal also confirmed that the inquiry hopes to complete its work by the end of October.

Judge Alan Mahon said he and the two other judges will be working on the final report into 2009.

The public hearings finished today for the summer break and will resume on 15 September for the appearance of former Taoiseach Bertie Ahern.

Mr Mahon said Cork developer Owen O'Callaghan will resume his evidence on 17 September and will be giving evidence on three half days each week for health reasons.

Developer Owen O'Callaghan has told the Mahon Tribunal that then Minister for Finance Bertie Ahern shot down his plan for national stadium in Dublin because it was on the wrong side of the Liffey.

Mr O'Callaghan said he was aware that an English company had been lobbying to build a stadium and casino in Dublin's Phoenix Park.

Mr O'Callaghan said he was not aware of a meeting in Los Angeles between Bertie Ahern and Chilton and O'Connor - his American backers for the stadium project - in March 1994.

Mr O'Callaghan agreed this would be bizarre if the stadium project had been discussed.

He did meet Mr Ahern later that month but said it was about the Quarryvale shopping centre development and he denied the stadium project was discussed.

He said that Mr Ahern assured him at that meeting that Blanchardstown Town Centre would not get tax designation advantage.

Mr O'Callaghan admitted he was concerned about reports that Manchester businessman Norman Turner was lobbying for the development in the Phoenix Park.

He knew that Mr Ahern's associate Des Richardson was associated with the project.

But he did not discuss the Phoenix Park scheme with Mr Richardson when he handed Mr Richardson a £80,000 donation for Fianna Fáil in June 1994.

He said he was also unaware of a claim by the late Liam Lawlor - who was working on the Clondalkin stadium project - that he had been offered £100,000 by Mr Richardson to work for the Phoenix Park plan.

Mr O'Callaghan said he and Bill O'Connor met with Mr Ahern in November 1994 when he shot down the Clondalkin stadium idea because it was on the wrong side of the Liffey.

The tribunal heard that Mr Ahern told the Dáil he had met Bill O'Connor in March 1994.

Mr O'Callaghan said he cannot understand why the two men seemed to be strangers. He said it would be way over his head as to why the two men would employ a ruse like that. 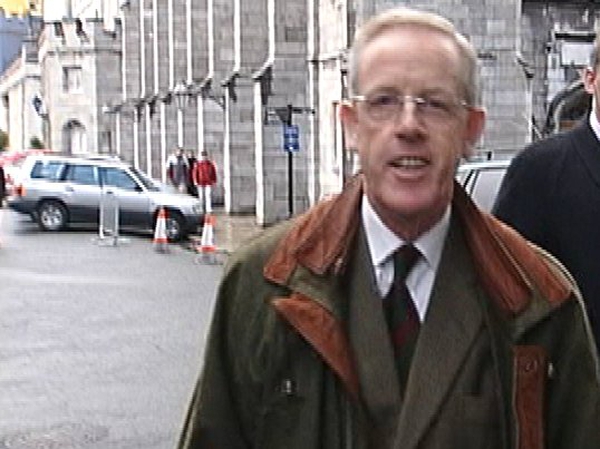