Fair City stars Ryan Andrews and Maclean Burke have told RTÉ Entertainment that they would love to see Dancing with the Stars professional Karen Byrne back in Carrigstown after she charmed the cast and crew with her upcoming guest appearance on the show.

The actors said that the episode will have plenty of "feelgood factor" for fans who have been missing the goings-on in Carrigstown since April.

The wait is almost over as Fair City is back next Sunday, September 6, as part of the Autumn Schedule.

A finalist in the recent series of Dancing with the Stars, Ryan Andrews now has to strut his stuff in his day job as his Fair City character Seán has taken up dancing - and that's where Karen Byrne comes into the story.

"Basically, what my character did during lockdown was dance classes in the park with Damien, Pete, Mairéad and the whole community," explained Andrews. "So Karen Byrne comes in and she plays Claire. She is brilliant. Genuinely. First scene - I'll be giving her an IFTA!"

"First day, no nerves, no nothing," continued Maclean Burke, who plays Damien. "'Just hold on to the script at least - don't be making us look bad!' But she did a great job on it. I mean, the two of them can dance. By God, they can dance."

Andrews said that he and Burke thought Byrne's cameo was "phenomenal".

"Genuinely, we're not just saying, 'Oh God, she's a natural,'" said Burke. "You'll often hear people saying, 'Oh they're a natural' when they couldn't do it. But she actually is a natural. She had it and she has it, whatever it may be.

"I'd be very surprised if she's not back. I think it'd be more a case of if she wanted to come back that the guys would have her in. She got on great on the set; she seemed to know what she was doing and was able to work well with cast and crew, which is always vitally important."

Andrews and Burke added that there's another treat at the end of the episode.

"We do this big dance routine in the middle of the Carrigstown street," smiled Andrews.

"It was like something out of La La Land!" laughed Burke. 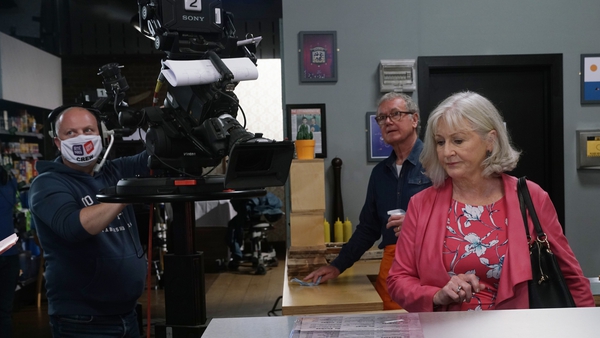