Brad Pitt has said fame can be "very confining" at times but also "liberating in the opportunities it provides."

The 55-year-old actor, who can currently be seen in Once Upon a Time in Hollywood, was asked if he found his level of fame to be liberating or suffocating, and he weighed up both sides.

"It's liberating in the opportunities it provides but, on the other hand, it can be very confining.

"I haven't seen a hotel lobby in 15 years because I've got to go up the ass end of a hotel and out the same way. We get our moments, but it's good and bad."

Once Upon a Time in Hollywood marks Pitt's second time working with Quentin Tarantino, having first worked with him on 2009's Inglorious Basterds, and the director said watching Pitt and Leonardo DiCaprio work together was like being an audience member as opposed to working on set.

"They were magical on screen", he told RTÉ Entertainment.

"When I sit there and I'm framing up the film and seeing them in the viewfinder, as I’m watching them through the viewfinder in a scene, it’s not like I’m on a set directing actors, I feel like I’m sitting in a movie theatre just watching these two movie stars act their butts off, it’s really great.

"It doesn’t feel like I’m standing on the sidewalk of a busy street with cars behind me, no I’m sitting in a movie theatre just watching these guys act." 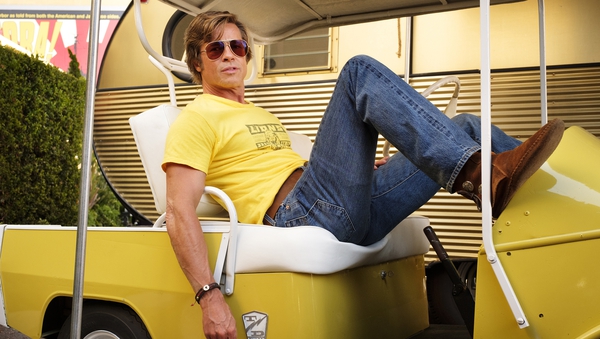