Ireland's former Eurovision contestant Brendan Murray has made it through to the Six Chair Challenge on the X Factor and will be mentored by One Direction's Louis Tomlinson.

The Galway man was among the happy hopefuls on Sunday night's show and will be joined in the next stage of the competition by Northern Irish singer Chloe Jane McAllister.

Not only did I get through to the Six Chair Challenge but @Louis_Tomlinson is my mentor! Absolutely over the moon, Six chair lets be having ya! ❌🎤 @TheXFactor pic.twitter.com/MVvjAoxHdN

Murray had survived a gruelling first audition earlier this month to win over the judges with his cover of Kate Bush's This Woman's Work. McAllister, who is from Limavady, impressed the judges with her cover of Jessie Ware's Say You Love Me on Sunday night.

The Press Association reports that judge Ayda Field Williams said the song reminded her of the times husband and fellow judge Robbie Williams had broken up with her before they were married.

"Rob put me through some," she recounted. "Rob dumped me three times. What a bad man, I know we're all thinking it."

After watching McAllister's performance, Field Williams added: "I thought that was amazing and I felt the heartbreak.

"In fact, I felt it so much that Rob will be sleeping on the couch tonight because it made me remember what an awful human he was to me."

Williams also praised McAllister, saying: "I've got a daughter and her name is Theodora Rose Williams and she's five-years-old and she is my life and I go to piano lessons with her every Friday and I was thinking about you being that same person and learning your craft.

"I want to show the person who means the most to me in the world exactly what they can achieve when they put their mind to it and they practise because you're the person I want my daughter to be like."

Anyone else pleased @RobbieWilliams didn't get the girls?! 👯 Would have been #totesawks #XFactor 😁😂 pic.twitter.com/0EGkW4u65r

The Dermot O'Leary-hosted show continues this Saturday on Virgin Media One and ITV at 8.35pm. 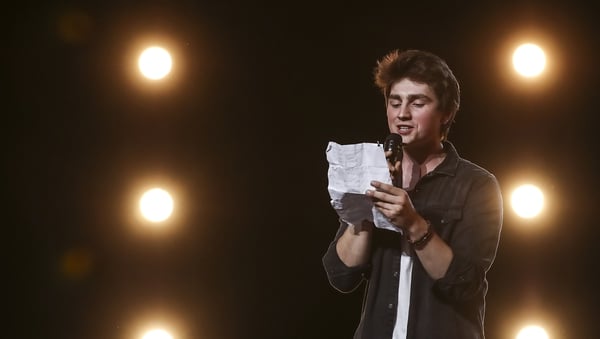