Singer Brendan Murray, who represented Ireland in the 2017 Eurovision Song Contest, made it through a gruelling X Factor audition on Sunday night, snatching victory from the jaws of defeat after he was thrown a number of lifelines by the judges.

The 21-year-old from Galway had chosen to sing We Don't Have to Take Our Clothes Off but Simon Cowell and his fellow judges weren't impressed with his choice of song.

Halting the performance, Cowell said: "I see an issue here. The issue is: lyrically, that song didn't suit your voice."

"I just think it's worth pushing you a little more which may, I think, give you the moment you deserve," said the music mogul.

Murray then had a couple of hours to learn the song - but his return to the stage was another nerve-shredding affair as he couldn't remember the words.

Cowell threw Murray another lifeline by telling him to read the lyrics off a sheet of paper - and Murray came into his own, wowing the judges and the crowd.

The new craze that'll take over the office tomorrow - the Paper Drop! 🙌 #XFactor

"You didn't know the words, but I have the feeling this song is going to change your life," said Cowell as all four judges voted to put Murray through to the next stage of the competition.

Also progressing in the competition were: Olatunji Yearwood, Jacqueline Faye and Anthony Russell.

Russell pulled out of the show last year for personal reasons and was supported in finding his way back from troubled times by Tomlinson.

On Sunday night's show he sang Avicii's Wake Me Up, reducing Tomlinson, Williams and Field to tears and receiving a standing ovation.

The X Factor continues on Virgin Media One and ITV next Saturday, September 8. 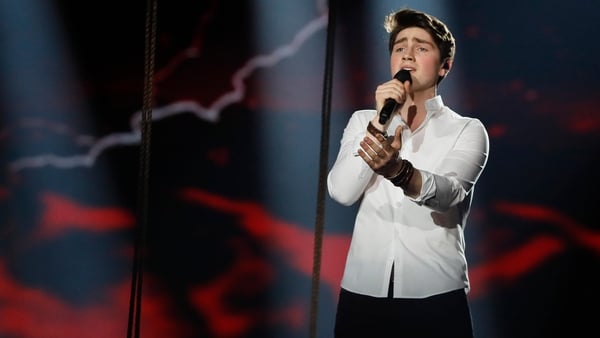