Not the most riveting Oscar ceremony this year and the choices were pretty conservative even by the Academy's standards but here's our Top 5 Oscar moments...

Frances McDormand orchestrates a standing ovation for women in Hollywood

Well, she was always going to win and Frances McDormand took home her second Oscar (it was the 60-year-old actress's fifth nomination) for Martin McDonagh's Three Billboards Outside Ebbing, Missouri. Never one to play the Hollywood game, she delivered the most rousing speech of the night (and proved she has the most manic laugh in Tinseltown) with righteous and stirring #metoo and Time's Up overtones. It all climaxed when McDormand exhorted every female nominee in the audience to stand up and take a bow in what has been a watershed year for Hollywood.

Whoever gives the shortest speech at tonight's #Oscars goes home with a brand new jet ski. Sam Rockwell has already given it a shot. https://t.co/exBwXiE7dz pic.twitter.com/2H3wzFXVbk

Given that Gary Oldman was the surprise (well, to us anyway) winner of Best Actor for playing a man famous for his oration, host Jimmy Kimmell offered a reward in the shape of a shiny jet ski for the shortest speech of the night. Said transport was modeled elegantly in true tacky game show style by Helen Mirren and dapper costume designer Mark Bridges rode off into the sunset with his new toy.

Why Jodie Foster was on crutches at the #Oscars https://t.co/7FxLKRj5Ny pic.twitter.com/otmeIQwLnG

When Jodie Foster (herself a two time Oscar winner) hobbled on stage on crutches to present the Best Actress award along with Jennifer Lawrence, we feared the worst - had the adorably klutzy JLaw tripped over the veteran actress backstage? Jodie herself said, "Streep. She I, Tonya’ed me," in reference to the infamous Tonya Harding/Nancy Kerrigan knee trembler portrayed in I, Tonya. The reliably Sphinx-like Foster didn't reveal why she was on crutches but reports earlier this week said she was spotted hobbling around Beverly Hills outside of a hospital. Then again, maybe Jodie has taken a leaf from Daniel Day Lewis's big book of method acting and is prepping for her next role, the silence of the limbs (you're fired - Ed).

Now, this was very sweet. Gary Oldman, who has been nominated once before for Tinker, Tailor, Soldier, Spy, won the Best Actor gong for his performance as Winston Churchill in Darkest Hour. 59-year-old Gary delivered an emotional speech in which he paid tribute to Winnie (one man's unrepentant imperialist, another's saviour of the world). But Oldman's real hero is his 99-year-old mother Kathleen, who was sitting at home back in London watching Sunday night's show. As he quipped before he strode off stage, "Put the kettle on. I'm bringing Oscar home."

With only one direct mention of Harvey Weinstein during host Jimmy Kimmell's opening monologue, no mentions of Kevin Spacey or Casey Affleck, and with Ryan Seacrest cold shouldered on the red carpet, this year's Oscars was surprisingly coy about the allegations of harassment that have bedeviled the industry in the past few months. However, more surprisingly the biggest elephant in the room scarcely got mentioned at all. President Trump's policies were referred to but it seems the "liberal elites" in Hollywood are taking their cue from Hillary and not naming him directly. So far, El Presidente has returned the favour and has not tweeted anything about this year's Oscars from underneath a pile of discarded burger cartons and cans of Coke. So far...

Here's how all the action unfolded on the night 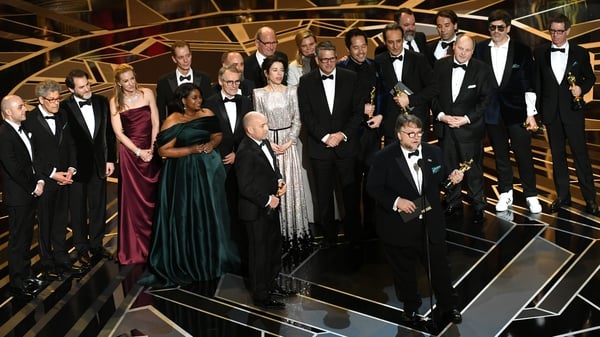 The Shape of Water is big winner at Oscars