Following Saturday night's attack in London, Scooter Braun, manager of Ariana Grande and Justin Bieber, has vowed that tonight's One Love Manchester concert will go ahead with "greater purpose" and "defiance" in the face of terrorism.

The benefit show will see Grande return to Manchester following a bomb attack at her concert in the city, which left 22 dead and many injured two weeks ago.

Grande won praise for announcing on Wednesday that she would return to play a huge show with an all-star line-up including Bieber, Coldplay, and One Direction's Niall Horan in Manchester's 50,000 capacity Old Trafford cricket ground.

This is gonna be amazing #OneLoveManchester pic.twitter.com/Ub60RPeESg

In an emotional tweet on Sunday morning, Braun said: "After the events in London last night, and those in Manchester just two weeks ago, we feel a sense of responsibility to honour those lost, injured and affected.

"We plan to honour them with courage, bravery, and defiance in the face of fear. Today's One Love Manchester benefit will not only continue, but do so with greater purpose. We must not be afraid, and in tribute to all those affected here and around the world, we will bring our voices together and sing loudly."

He added: "We ask the strong city of Manchester and the world to join us in making the statement that hatred and fear will never win. Today we stand together. Thank you."

The One Love show will be broadcast live on RTÉ 2, RTÉ 2fm and BBC One tonight and fans who were at Grande's concert at the Manchester Arena two weeks ago have been offered free tickets to the event.

this is inside of the #OneLoveManchester show.. This looks so beautiful :') pic.twitter.com/1wqqWbRIay

Grande arrived back in Manchester earlier this week and, on Friday, visited fans left hospitalised after the attack on her concert. 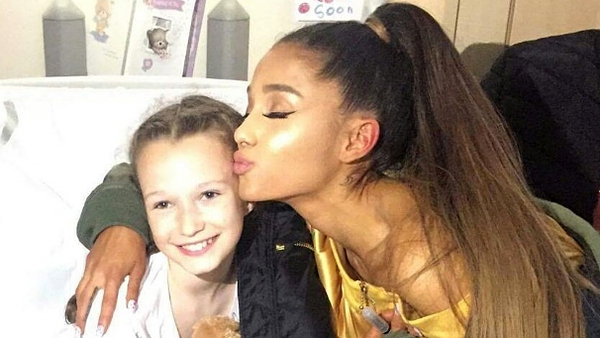