With enough real life drama emerging from the the White House on an almost hourly basis, the new season of Netflix hit House of Cards looks like it's doing its very best to outdo the surreal situation unfolding in Washington right now.

Kevin Spacey's machiavellian US president Frank Underwood returns and season five, which will be available to watch from May 30, features fake news and a possible terror attack among the story lines.

However, in this fictional world, the president and the First Lady (as played by the brilliant Robin Wright) actually live in the White House seven days a week.

The last time we saw the Underwoods, a gruesome beheading indicating the White House was standing firm against terrorist threats, plus Claire broke the fourth wall for the first time, albeit briefly.

But it looks like Mrs Underwood will be addressing us much more frequently in the forthcoming series if this new trailer is anything to go by.

This rather creepy preview, featuring a direct message from the show's First Lady/vice presidential nominee, hints at the terror to come if the Underwoods remain in the White House.

The last season of House of Cards mirrored political events in the US as President Underwood faced off the challenge of a younger and more charismatic Republican rival - and his media savvy wife (played by Irish actress Dominique McElligott) - in the race for the White House.

It also saw Claire putting aside her reservations about the state of their marriage in order to further her own ruthless political ambitions.

No doubt the real political drama in Washington has provided plenty of material for the writers - with Spacey commenting last year that turning on the news makes him think the political thriller "doesn’t go far enough" in reflecting the real-life race for the White House. 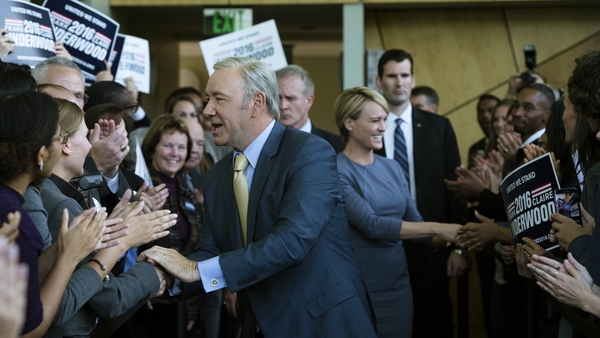