Dancing With The Stars judges Loraine Barry and Brian Redmond have revealed that they would love for the series to return next year.

Speaking to RTÉ Entertainment, Barry said she "doesn't know anything at the moment" about a potential second series, but added that she "can't see it not happening".

"It's been so successful, everybody loves it", she said. "It comes on a Sunday evening in wintertime, although our winter was quite mild this year, but I think it's a perfect setting, a very family orientated show as well. I think it'd be fantastic."

Redmond said he "absolutely" hopes it will be renewed for a second run. "We've got to wait and see what happens haven't we!", he said. "But listen, I think it would be very disappointing for many people if it didn't and I am certainly one person who hopes that it does come back next year."

Barry said she was "honoured" to be on the judging panel of the show, which ended on Sunday with a surprise victory for former GAA player Aidan O'Mahony.

"I'm Irish and to be here at the beginning of this show has just been fantastic for many, many reasons", she said. "You walk out on the street and the public are talking about it, you could be sitting on a bus or a train and you hear people talking about it. I think it's been wonderful for Ireland and great for ballroom dancing in Ireland."

Redmond said he was taken aback by the show's runaway success. "I think for me the real eureka moment was actually not even with the show itself, it was the first edition of Can't Stop Dancing that went live on the Friday night, sat at home with the family and as soon as it came on I thought 'This looks good'.

"And then judging the reaction on social media the first night the show was live, it's been an absolute phenomenon."

One of Redmond's favourite moments from the series is one that is sure to stand out in most people's minds - the Dessie swim.

"We've had some fabulous performances, so many of them that it's hard to pick out one, we had great moments that will stand out in people's memories, things like the Dessie swim, but we had great performances right across the board. Everybody has had a great time that has been part of the show", he said.

Barry's most memorable dance involved Hometown star Dayl Cronin, who was considered one of the show's best dancers despite exiting in the semi-final.

"I always have one that stays with me and that was switch up week and I thought everybody did well, but one in particular for me was Dayl and Valeria", she said. "That will stay with me for a long time, the hip-hop, the bodysuits that they had on, that was very memorable for me."

Although O'Mahony's shock win has been divisive among viewers, runner-ups Denise McCormack and Ryan McShane reckon he "deserved to win" as he is a "great ambassador" for the show. 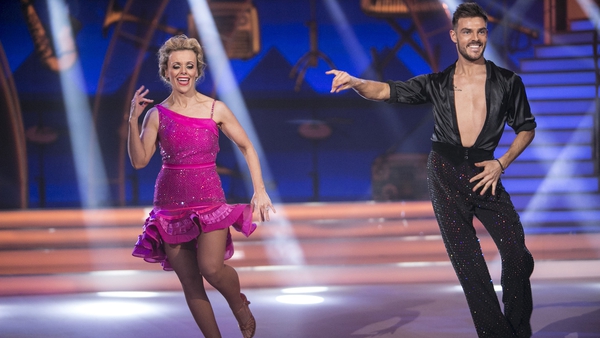 DWTS: 'Aidan is a great ambassador for the show'