Folk songs are said to be the songs of the people. The songs we love so well. Amhráin atá i mbéal an phobail. These are, most often, the songs that are widely sung, listened to and carried around fondly in our hearts.

We Irish love a good sing-song. ‘A flowing cup is raised’, someone known to have ‘a voice’ is cajoled to sing and then we are off. The well-loved folk songs heard on such occasions might have antique roots and anonymous composers or may be of more recent vintage having flowed from the pen of one of our many great contemporary songwriters. Other favourite songs might have crossed and re-crossed the Atlantic or the Irish Sea, carried by emigrants whose music was ‘their souls’ currency / the pure metal of their hearts,’ to quote from Moya Cannon’s beautiful poem Carrying the Songs.

Folk songs have an ability to touch our hearts. They have the power to capture the spirit of an era, to comment forcefully on social or political movements or events and to stir patriotic feelings.

A chosen song may have been found and preserved by one of the great folk song collectors such as Alan Lomax from the US or our own Séamus Ennis or the late Tom Munnelly - inducted into the Hall of Fame at the inaugural RTÉ Radio 1 Folk Awards in 2018 for his work in this area.

Some of today’s favourite folk songs became popular in the 1960s during what became known as Ireland’s ‘ballad boom’. This new wave of interest in folk music in Ireland came on the heels of the American folk revival, aided in the US by the likes of Pete Seeger and Woody Guthrie and soon spread to the UK where folk clubs sprang up in many cities. The Clancy Brothers and Tommy Makem were significant figures in the American folk revival where they influenced the young Bob Dylan and other emerging folk artists with their lively arrangements of old Irish ballads, sea-shanties, rebel and drinking songs. Music scholars credit them with the revival of Irish folk in the 60s, a time when the country rediscovered with pride its own songs and music. Eddie Fury says ‘The Clancys paved the way for everyone else who followed’.

Love, of course, is another major theme in folk songs.

Folk songs have an ability to touch our hearts. They have the power to capture the spirit of an era, to comment forcefully on social or political movements or events and to stir patriotic feelings. They can make us reflect on the hardships caused by injustice, exile, emigration, imprisonment or death. The terrible famine years and other events in our troubled history have inspired many iconic folk songs: The Fields of Athenry and Grace come to mind.

Love, of course, is another major theme in folk songs. The voice of love can be heard through the cries of pain, separation and exile and in the words of the emigrant who longs for home and the girl he left behind: ‘No matter where I wander I’m still haunted by your name...’. Or in the lament of the woman whose man has been transported to the ends of the earth: ‘For she’ll live in hope and pray for her love in Botany Bay’.

There are also examples of ‘happy’ love songs but these are the exceptions. Johnny Duhan’s The Voyage is an obvious one. Bawdy folk songs and drinking songs are always popular too; Seven Drunken Nights, a version of an old Scottish song called Our Goodman, was a massive hit for The Dubliners in the ‘60s.

Folk songs today enjoy a wider, more flexible, definition than in times past. The gaps between the traditional arrangements and the more contemporary sounds and what is now labelled world music have narrowed. Instrumental accompaniment has also broadened to include electric guitars, brass, strings and percussion alongside the more familiar acoustic guitar, banjo, mandolin or fiddle. These days, compositions with the sophisticated elegance of Declan O’Rourke’s Galileo (Someone Like You) or the intricate harmonies of Ye Vagabonds can sit comfortably at the folk song table beside songs with the bawdy earthiness of the banjo-picking Pecker Dunne’s O Sullivan’s John or the ancient enchantment captured by Seosamh Ó hÉanaí’s singing in the sean-nós style.

Leaving definition aside, perhaps it is the essential meaning, emotion and honesty at the heart of what is termed ‘folk songs’ that makes the genre appealing to so many. What scholars call verisimilitude, what we recognise as truth.

Gerard Hanberry is the author of Great Irish Love Songs and the Women Who Inspired Them, published by The Collins Press

Voting for the nominations for Ireland's Favourite Folk Song is now officially closed - thank you to the many thousands who made your voices heard, and for your brilliant selections - now for the shortlist! #rtefolksong 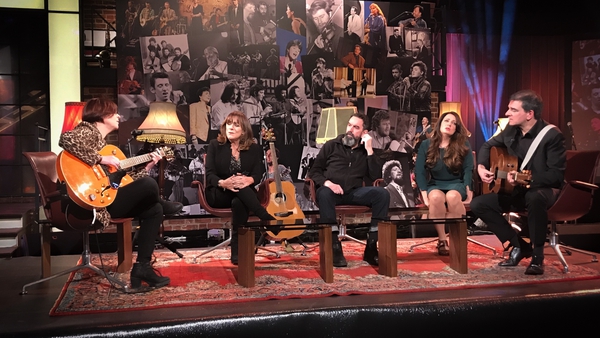