Ireland's High Court prevents a 14 year-old girl from travelling to Britain for an abortion.

Although the Supreme Court overturns the ruling, the 'X' Case leads to bitter debate and a referendum on abortion.

We need your consent to load this rte-player contentWe use rte-player to manage extra content that can set cookies on your device and collect data about your activity. Please review their details and accept them to load the content.Manage Preferences
The X Case debate - Today Tonight reports on 18 February 1992 (via RTÉ Archives)

Unemployment reaches record levels in 1992. 290,000 people are now out of work. Cork has one of the highest unemployment rates.

Los Angeles is hit by the Rodney King 'race riots'. Four policemen accused of beating a black suspect are acquitted by an all-white jury. L.A. has two days of rioting, looting and murder. 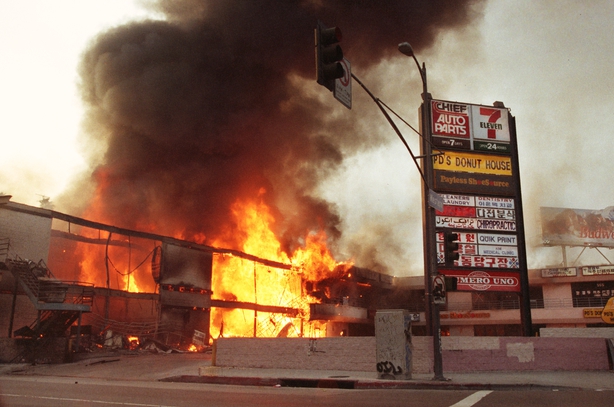 RTÉ goes on strike in 1992. Normal service is resumed after six weeks.

Sean Doherty goes on Nighthawks on RTÉ. He implicates Charles Haughey in the 1982 phone-tapping scandal.

With the Progressive Democrats threatening to pull out of coalition government, Haughey resigns. Fianna Fail says goodbye to the man who has led the party for thirteen years.

Albert Reynolds is the new Taoiseach and Fianna Fail leader.

We need your consent to load this rte-player contentWe use rte-player to manage extra content that can set cookies on your device and collect data about your activity. Please review their details and accept them to load the content.Manage Preferences
Listen: Albert Reynolds elected Taoiseach - RTÉ News reports on 11 February 1992 (via RTÉ Archives)

1992 is a difficult year for Britain's Royals.

After eleven years of marriage, Princess Diana and Prince Charles agree to separate. The Queen dubs the year "Annus Horribilis".

American woman Annie Murphy reveals her affair with Dr Eamonn Casey, who is also the father of her 17 year-old son. Dr Casey admits giving £70,000 of diocesan funds to Annie and Peter Murphy. He flees to South America.

In Florida, Ben Dunne is arrested on drugs charges. He is freed after paying a $5,000 fine.

On the same day that the IRA massacres eight Protestant workmen. Northern Secretary Peter Brooke sings on the Late Late. An angry reaction follows from the North.

Somalia is ravaged by civil wars and famine. Gang warlords control the supply of food. Millions of people face starvation.

Bosnian Serb forces lay siege to Sarajevo. A limited UN force is powerless to prevent the carnage. Sarajevo's citizens are left to the shelling and sniper fire. The world is shocked, but not shocked enough to act decisively- even after atrocities at a Bosnian Serb prison camp.

Yugoslav refugees are made welcome in Ireland in 1992.

In the new dance music culture, Ecstasy is the illegal drug of choice. Experts warn of dangerous side-effects.

Bill Clinton challenges George Bush for the U.S. presidency, fighting allegations of sleaze, drug-taking and draft-dodging. He is elected President on 3 November winning 43% of the vote.

Amid accusations of 'dishonesty' at the Beef Tribunal, The Progressive Democrats pull out of government. A general election fails to produce a clear result. 1992 closes with various political negotiations in progress.

Whitney Houston - I Will Always Love You

Stereo MC'S - Step It Up

Linda Martin - Why Me?

Lightning Seeds - The Life Of Riley

Daniel O'Donnell - I Just Want To Dance With You

Charles And Eddie - Would I Lie To You?