Analysis: a new book measures the human cost of Ireland's revolutionary years by cataloguing and analysing the deaths of 2,850 people

At the end of December 1920, Thomas Gilmartin, archbishop of Tuam, reflected bitterly on the year that was drawing to a close. He lamented that instead of peace, there was war, murder and reprisals; instead of order, there was disorder, vengeance and destruction; instead of content, there was grave fear, insecurity and heartbreak. The archbishop prayed for all the victims of this troubled time, without distinction, and that God would deliver the diocese from murder, attempted murder, arson and terrorism.

Gilmartin and his colleagues were appalled at the excesses of the Crown forces, which they deemed repression pure and simple. They also forcefully condemned the actions of the IRA. If 1920 was one of the bleakest years in Irish history since the land war of the 1880s, the New Year heralded an even more violent one as the Irish War of Independence entered a final and bloody stage.

From RTÉ Archives, Seán MacEoin talks to Terence de Vere White in a December 1964 episode of The Survivors about attacking a RIC barracks in Drumlish in 1920

There has been tendency in terms of the Irish Revolution of 1916 to 1923 to focus on the well-known events – the 1916 Rising, the first action at Soloheadbeg in January 1919 and, in recent weeks, Bloody Sunday, the Kilmichael ambush, the burning of Cork city and appallingly gruesome murders like those of Father Michael Griffin or the Loughnane brothers in Galway in November 1920. Of course, this is all very welcome because a wealth of new research and critical perspectives have been brought to bear that facilitates a more informed understanding of these significant episodes.

However, such well-known events are really only a snapshot of the human cost of the Irish Revolution. There was not a single day in December 1920 – including Christmas Eve and Christmas Day – when several people did not lose their lives due to political violence. With the exception of two dates, the same was true of the opening month of 1921.

Death is just one rather crude measure of political violence. We should not for a moment forget other manifestations such as the physical and mental traumas that damaged people's life chances, or the destruction of property that ruined people’s livelihoods and left them with nothing.

From RTÉ Radio 1's This Week, Elaine Keogh looks back at the events which led IRA volunteer Kevin Barry to his death on November 1st 1920.

Despite the avalanche of writing on the Irish Revolution, remarkably no attempt has been made to present and document a comprehensive list of all fatalities attributable to Irish political violence. Consequently, there has been no agreement among scholars on so vital a fundamental as the number of fatalities, let alone their identities and the circumstances of their deaths.

That situation has been put right by the monumental The Dead of the Irish Revolution published by Yale University Press in October 2020. In this work, Eunan O'Halpin and I catalogue and analyse the deaths of 2,850 people who died during the revolutionary years: 504 in 1916 and 2,346 between 1917 and 1921.

Presented chronologically, this study provides a unique and comprehensive picture of the men, women and children who died: in what manner, by whose hands and why. Through their stories, we obtain original insight into the Irish Revolution itself. As much as historians like to explain movements, or historical processes, history at its most essential is about people and the times they lived in. For this reason, the individual stories underneath the absolute fatality figures are deeply compelling and often tragic. 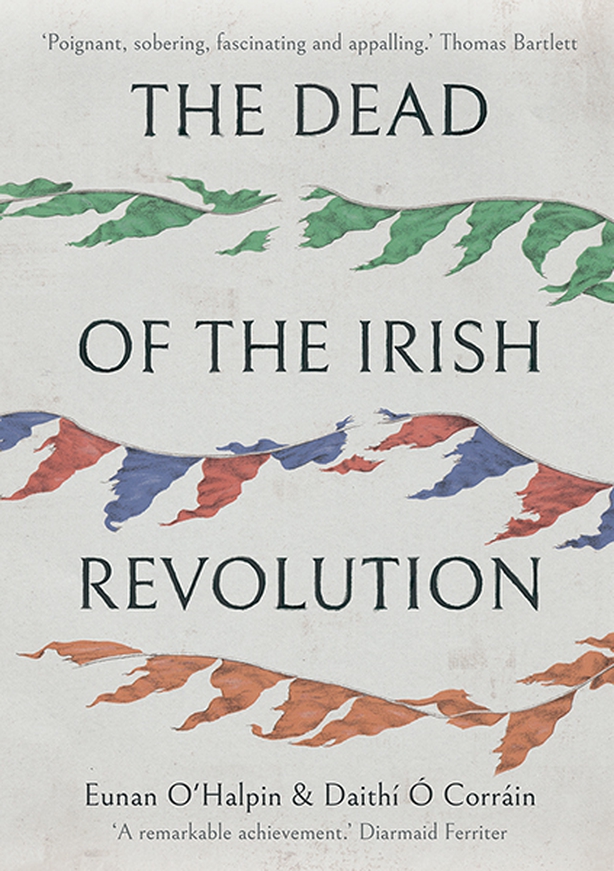 One way to appreciate how significant the death toll was between 1916 and 1921 is to compare it to the figure compiled by the magisterial Lost Lives project on the Northern Ireland Troubles by David McKittrick, Seamus Kelters, Brian Feeney, Chris Thornton and David McVea. Lost Lives recorded a total of 3,720 deaths over a period of more than three decades. Even allowing for the major advances in medicine, surgery and treatment, the scale of the loss of life in the condensed five-year period between 1916 and 1921 is disturbing.

There is one very significant parallel with Lost Lives. During the Northern Ireland Troubles, a little over 2,000, or about 56% were civilians. During the Irish Revolution, 1,195 of 2,850 or 42% were civilian and the respective figures for rebel, police and British military fatalities was 20%, 19% and 19%. While it is a truism that civilians are always the losers in a war situation, that is demonstrably the case during the Irish Revolution. Recovering their stories – most of which are not even recalled in historical footnotes – has been the most difficult but also the most satisfying aspect of researching The Dead of the Irish Revolution.

Typically, civilians were innocent victims in the wrong place at the wrong time. The nature of the fighting during the 1916 Rising ensured a significant number of civilian deaths, 276 out of a total of 504 or 55 per cent. For example, Bridget Allen, a 16-year-old factory hand was shot through the window of her home on Arran Quay on 27 April 1916. On the same day, Jane Costello, a 23-year-old typist, went to the window of her lodgings in Seville Place during a lull in the fighting and was shot dead. Malachy Brennan, a 44-year-old labourer, was shot at door of his wife’s shop, leaving his widow to raise their seven children.

From RTÉ Radio 1's History Show, the reprisals and counter-reprisals that came to define the War of Independence

During the War of Independence period, there were arguably increased dangers for the civilian population from crossfire, explosions, reckless driving by the Crown forces and indiscriminate largely unregulated violence against civilians by the forces of the Crown by day and by night. In a previous piece for RTÉ Brainstorm, I wrote of the death of Ellen Quinn in Kiltartan on 1 November, which is evoked in W.B. Yeats’s poem Reprisals.

But most civilians are not recalled in poetry or in stone in the form of monuments. There is, for example, no monument or account until now of the death of 3-and-a-half-year-old William Fitzgerald. He was on Camden Street selling fruit with his mother, Katherine, on 5 February 1921 when two British military lorries were attacked by the IRA and a homemade grenade was thrown. The little boy, one of the youngest fatalities of the War of Independence, died because a grenade fragment penetrated his skull.

There are hundreds of similar heart-breaking stories of grieving families who quietly suffered the anguish of losing a son, daughter, grandparent, father, mother, brother or sister. At Christmas 1920, families in Ireland and Britain mourned almost 800 dead. The pleas of Archbishop Gilmartin were not heeded and 1921 witnessed the deaths of almost 1,400.

The Dead of the Irish Revolution makes us think more deeply about this grim period and the scale of human loss and suffering that went side by side and day by day with the often simplistic narratives of heroic national struggle. Collectively, the individual stories of all the Dead of the Irish Revolution – the ordinary men, women and children, the rebels and the members of the Crown forces – provide us with an immeasurably richer and more informed if sombre and stark understanding of that troubled time.

The strange, gruesome murder of a Galway priest 100 years ago