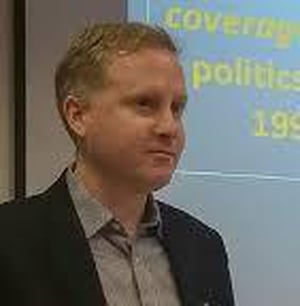 Analysis: a French newspaper used cartoons to tell readers about how British forces destroyed the heart of the city

Cork was the scene of much death and destruction during the War of Independence. According to the Atlas of the Irish Revolution, "County Cork was the most violent county in Ireland" from 1919 to 1921 and it also suffered "a disproportionate share of Crown forces reprisals".

The burning of Cork occured a hundred years ago tonight. Five acres of property in the city centre were destroyed in a reprisal attack by Crown forces. A total of 57 premises, including shops on St Patrick's Street, City Hall and the Carnegie Library, all went up in flames. A further 20 premises were badly damaged, while 12 were wrecked and looted. The cost of the destruction was estimated at £2.5 million and over 2,000 people lost their jobs.

Just a few days afterwards, a French daily newspaper drew attention to the event with an editorial cartoon. That may come as a surprise to some, but cartoons have long been used in the French press as a means of telling a story or criticising something. Since even before the time of the French Revolution, cartoons have been used to relay news or lampoon all kinds of authority figures, from royalty to politicians and clergy.

Under the satirical heading of 'Tourisme' (Tourism), the cartoon appeared in the left-leaning daily newspaper, L'Œuvre, on December 16th 1920. A British soldier, clearly identifiable by his soup bowl shaped 'Brodie' helmet, can be seen giving directions to two people. In the background, a traditional welcome sign has been replaced by one which reads ominously: ‘HERE WAS CORK’. The sign stands in front of ruined buildings. The caption at the bottom of the cartoon could be translated into English as "They have what it takes in England", or the more cynical might say "The English really have balls".

It was common for Irish and British newspapers to use editorial cartoons to examine what was happening in Ireland during the War of Independence and Civil War. Using the penname 'Shemus', Ernest Forbes drew over 300 cartoons in the Freeman's Journal newspaper between 1920 and 1924. They were referred to in the Dáil at the time as "artistic bombs" due to the explosive nature of their content.

On the face of it, it might seem strange that a French newspaper would publish cartoons about what was happening in Ireland. However, like many other newspapers around the world, L’Œuvre had been following the news that was coming out of what was then a part of the British Empire for some time. They had followed the hunger strike of Terence MacSwiney and, from around the start of 1921, the paper published almost daily updates on what was happening in Ireland. These were generally small news items recounting the latest IRA attack or Crown forces reprisal.

From time to time, the coverage of Ireland was supplemented by lengthy articles, including opinion pieces and eyewitness accounts from journalists who visited the island. In the period between July 1920 and October 1922, L’Œuvre printed 27 cartoons which cast a satirical eye on the major events of the War of Independence and Civil War.

The Cork town of Midleton was the scene the first official reprisal attack on December 29th1920, when six houses were burned. Days later, agricultural machinery was also destroyed. It followed an IRA attack on a Royal Irish Constabulary (RIC) and Black and Tan patrol in which three policemen were killed.

Just days later, on January 3rd 1921, a cartoon entitled ‘Devinette’ [Riddle] appeared on L’Œuvre’s front page. ‘What is the difference between Joan of Arc and an Irish village?’, a man asks his companion. When his friend does not know what to respond, he gives him the answer: ‘None, they were both burned by the English’.

This kind of sarcastic humour continued and on January 15th 1921, a cartoon entitled ‘Le filon’ [the money-spinner] or [cushy number] appeared on the newspaper’s front page. One man says to his friend: "A really good deal, an undertaker’s business in Ireland!". It is believed that 528 individuals died in Cork as a result of the conflict during the War of Independence.

Another cartoon from January 26th 1921 shows that mother-in-law jokes work across cultures and national boundaries. Under the heading ‘Le bon endroit’ [the right spot], a woman asks the question of a man sitting beside her: "Would you know of a quiet place where I could relax?". "Of course, dear mother-in-law", comes the reply from the man looking sullenly at his wife’s mother, before suggesting that she could visit Cork.

It may seem strange to us today that events in Ireland were used in this way and that the paper’s readers could understand the joke that the cartoonist was trying to make. However, it goes to show that the coverage of Ireland in the French press during these years was so intense that many would have understood exactly what they meant.

Oliver O'Hanlon is a PhD student in the Department of French at the School of Languages, Literatures and Cultures and School of History at UCC