Opinion: when it comes to poverty, how does Ireland compare internationally?

Last week, the final report of the United Nations Special Rapporteur, Philip Alston, on extreme poverty and human rights in Britain and Northern Ireland was released. To say that the report was damming of the policies and practices of the British political establishment would be an understatement.

The report describes a Britain where one fifth of the population (14 million people) live in poverty, where policies of austerity introduced in 2010 continue to be in place despite the horrendous social consequences. Close to 40% of children are predicted to be living in poverty by 2021, food banks have proliferated and homelessness and rough sleeping have increased. The report even goes so far as to compare conditions of the modern Britain of 2019 to the conditions faced in the 19th century workhouses of Dickensian Britain.

But how does the Republic of Ireland, which was not part of the report, fare when it comes to poverty?  How do we "do" poverty here and how does this compare internationally?

How do we know about poverty here?

The Central Statistics Office (CSO) is responsible for gathering statistics on a range of areas including the environment, the economy, society and so on. In respect to living conditions, the major annual CSO publication is the Survey on Income and Living Conditions (SILC). This can be analysed to examine poverty in Ireland by looking at two separate yet overlapping things, the "at risk of poverty" rate and enforced deprivation.

The "at risk of poverty" threshold is defined as 60% of the median equivalised disposable income and is a relative measure. Enforced deprivation is different and is an absolute measure. In order to be considered forcibly deprived, people need to have experienced two separate indicators, such as being without heating at some stage in the last year, being unable to afford two pairs of strong shoes, unable to afford a roast once a week or unable to afford to replace any worn out furniture and others.

From RTÉ Radio 1's Morning Ireland, Seán Healy, Director of Social Justice Ireland talks about the CSO's finding that nearly16% of households were at risk of poverty in Ireland in 2017

In Ireland, to be considered consistently poor, you need to be both "at risk of poverty" and deprived.  For 2017 this figure stood at 6.7%. This means that the government here can claim a reasonably low rate of poverty, despite the fact that households may separately be experiencing enforced deprivation or be at risk of poverty. In real terms it looks like this:

Those most at risk of poverty in 2017 were unemployed individuals (42%) followed by individuals living in households where there was no person at work (40.3%). The "at risk of poverty" rate for households with one adult and one or more child aged under 18 was 39.9%. In terms of deprivation, the most common types experienced by Irish households were an inability to afford to replace worn out furniture (20.4%), not being able to have family or friends for a drink or a meal once a month (13.9%) and being unable to afford a morning, afternoon or evening out in the last fortnight (13.2%). 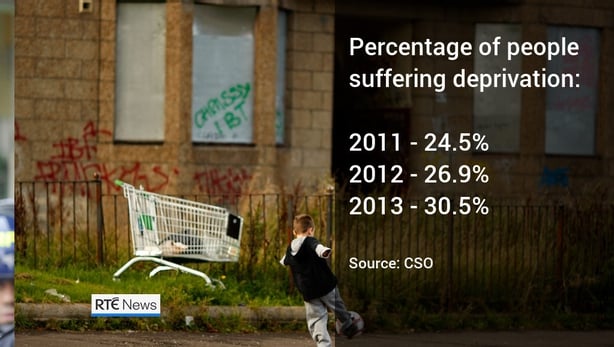 How do we fare internationally?

This means that headline income poverty or the "at risk of poverty" rate produced by Eurostat differs slightly from the one produced by the CSO. The EU-SILC and Eurostat definition of material deprivation also differs from the CSO definition and consists of the enforced inability to pay for at least four of the following deprivation items (1) rent, mortgage or utility bills; (2) adequate heating; (3) unexpected expenses; (4) meat or proteins regularly; (5) ability to go on holiday; (6) a television set; (7) a washing machine; (8) a car and (9) a telephone/mobile.

From RTÉ Radio 1's Drivetime, Social Justice Ireland's Research and Policy Analyst Michelle Murphy on their report that nearly a quarter of a million children are living below the poverty line in Ireland

In terms of deprivation we are, like we are in so many things, in the margins of being decent at 6.6%. The share of those severely materially deprived varies among EU member states, going from less than 2% in Luxembourg and Sweden, to more than one fifth in Greece (21.1%) and one third in Bulgaria (30%). Of all the reporting countries, the highest severe material deprivation rate was recorded in Turkey (32.9% for 2016).

What does living in poverty mean?

The National Anti-Poverty Strategy (NAPS) published by government way back in 1997 used the following definition of poverty: "people are living in poverty if their income and resources (material, cultural and social) are so inadequate as to preclude them from having a standard of living that is regarded as acceptable by Irish society generally. As a result of inadequate income and resources, people may be excluded and marginalised from participating in activities that are considered the norm for other people in society."

Poverty then, is as much about a lack of options as it is about material disadvantage. In reality though, poverty is not natural or inevitable. The poor need not always be with us. The sad truth is that poverty is a political choice driven by ideological thinking. If the figures presented here are hard-hitting, good, they are meant to be. We are failing people. We are failing children, one in five of whom are at risk of poverty.

From RTÉ Archives, a RTÉ News report from 1981 by Charlie Bird with Sister Stanislaus Kennedy talking about the new poor and the establishment of the Combat Poverty Agency

In a year that commemorates a century since the democratic programme of the first Dáil - indeed, 100 years since the sitting of the first Dáil - it should be remembered that there was an explicit commitment "to secure that no child shall suffer hunger or cold from lack of food, clothing, or shelter" within that document. The figures presented here suggest that we’ve made a complete mess of that.

How our generosity for charities exposes the failure of state

'People usually leave Ireland when a crisis hits our economy'