Opinion: is it not an indictment of Ireland in 2020 that we still need to raise money to help out good causes and charities?

Charity is a common practice in Ireland. The roots of charity, the act of giving to the benefit of those less fortunate or less well-off, are deep here, having a strong basis in religion and in Christian values in particular. Though charity may be with us all year round, it is undoubtedly something we become more aware of at Christmas. Seasonal appeals are common, and, in the spirit of Christmas, people are arguably more inclined to give, which is something charities can capitalize on.

Indeed, we remember the charity workers who visited Ebenezer Scrooge's office in Charles Dickens' A Christmas Carol, making their appeal in the following terms:

We will also remember that Scrooge, before he had claimed his redemption, gave the thought of charity short shrift. A Christmas Carol was first published in 1843 in the time when workhouses passed for what constituted state welfare. Perhaps it is not surprising then that charity abounded.

We may well want to think that the times Dickens described have been fully consigned to the bin of history, yet can we really make this claim? While the workhouses may be gone, the seasonal appeal to charity is still with us and the poor and destitute (though we may no longer use these terms) still suffer greatly and still want for the common necessaries of life.

CSO figures for 2019 show that the 'at risk of poverty' rate stood at 12.8%. Furthermore, 17.8% of the population were defined as living in enforced deprivation. Figures such as these tell us exactly why we have and need charities while at the same time demonstrating a failure on the part of our society and the policies of the state. 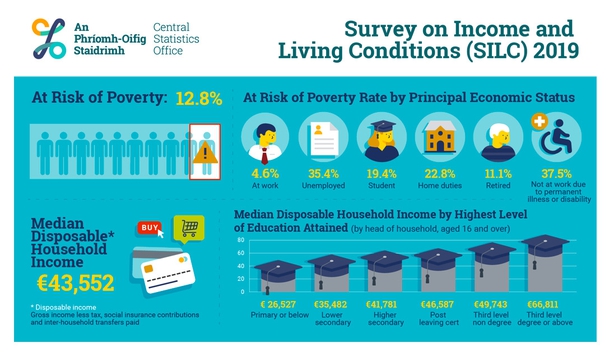 The charge of failure on the part of the state policies is demonstrable in many ways, each of which denotes poverty as a political choice. Take, for example, people receiving social welfare. In 2019, the minimum weekly disposable income needed for a single adult to stay above the poverty line stood at €252.11. The social welfare rate for a single adult in the same year stood at €203 for someone over 26, €157.80 for those aged 25 and at €112.70 for persons aged 18 to 24. It becomes clear why this group may struggle to make ends meet, leaving charity to make up the shortfall. Simply put, charity saves money for the state.

Poverty persists and, as a consequence, so does charity. Curiously though, and despite the fact that charity persists only on the basis that there are those who continue to need it, there appears to be an almost universal social acceptance of charity and of charity as 'good'.

Take for example, the recent Late Late Toy Show. A charity appeal launched during the show raised a stunning €6.2m, which will be used to support children's charities and causes around the country. This is a fact which demonstrates an enormous generosity of spirit while at the same time exposing failure on the part of our society and the state.

Yet, for the most part, this was seen as a universally good thing and undoubtedly fostered a sense of positivity for a great many people. However, is it an aberration that we need to raise money on a Christmas TV show in order to ‘help out good causes’? Is this not an indictment of Ireland in 2020? Why do we continue to accept charity as good? Is it because it is good for the givers? It is no secret that giving to charity certainly has positive tax implications.

Clement Atlee, British Prime Minister at the time the Poor Laws were abolished, once remarked that "the evil of charity is that it tends to make the charitable think that he has done his duty by giving away some trifling sum, his conscience is put to sleep, and he takes no trouble to consider the social problem any further."

Would it not be better then to foster the vision of a society where there was no need for a reliance on charity in the first place?

Rather than being something good, charity might more accurately be said to be a necessary evil or at least something that allows an evil to persist. Whether you agree or not, the fact that we need charity to cover the gaping holes left by the state is an abomination. This is not an indictment of those ordinary people who give, though the giving may do wonders for their conscience and their taxes. Rather, it is a condemnation that the necessity exists to give in this way in the first place.

If this seems harsh, or if it seems to smack of bah humbug at this time of year, consider those on the receiving end of charity. There is no salved conscience in the taking of charity, no tax-break, no sense of efficacy, no self-esteem. There is only the humbling specter of shame. Would it not be better then to foster the vision of a society where there was no need for a reliance on charity in the first place? Merry Christmas.

'People usually leave Ireland when a crisis hits our economy'