Opinion: economic migration from Ireland is unlikely to be an option in a world where movement is greatly restricted

In times of crisis, Ireland has always been able to rely on the safety valve provided by emigration to help ease the burden on the infrastructure of the state. Indeed, Irish history is peppered with periods of intense emigration. During the Great Famine of 1845-1849, over a million people left Ireland to escape hunger and destitution.

But we do not need to go so far back. Indeed, we need only conjure a time still fresh in the memory to find an example of when emigration acted a safety valve for the state and, at the same time, a painful schism for many families.

In the wake of the last economic downturn, many thousands of Irish people, along with people of other nationalities living here, began a period of intense outward migration. Between April 2008 and April 2009, CSO figures show that emigration began in earnest, increasing by 40% from 45,300 to 65,100.

"We can't all live on a small island". From RTÉ News Archive, a report on criticism of Minister of Foreign Affairs, Brian Lehihan, over his remarks on emigration in 1987

This shows that Ireland experienced a steady flow of outward migration during the last period of economic crisis for a period of over five years. What is crucially important to understand about these figures is that the majority of those emigrating encapsulated age ranges where people are most actively engaged in the labour market. Put another way, these were workers who were leaving to find employment.

If we take 2012 as just one example of this, the age range accounting for the largest group of emigrants were those aged 24 to 44 at 39.5%. The next largest group were those aged 15 to 24 at 35.8%. Taken together then, those aged between 15 and 44 accounted for 75.3% of all those who emigrated from Ireland in the twelve months to April 2012. Unsurprisingly, the data for all the years during which emigration was trending upward shows similar majorities.

From RTÉ Radio One's Morning Ireland, Jackie Fox reports on the 121,000 trades people who emigrated from Ireland after losinh their jobs during the economic crash

This tells us that people leave Ireland when a crisis in our economy occurs. It also tells us that a majority of the people who leave are those most likely to be engaged in the labour market. They are a workforce, able to make use of the global labour market. When they do this, they relieve the pressure on the state which no longer has to support them via welfare infrastructure, and which may, in fact, benefit through their remittances.

But this is what makes the current situation so very different and potentially hugely problematic. In a world where movement is greatly restricted, the usual safety valve of relieving pressure through high levels of economic migration is unlikely to be an option. In respect to how things currently stand, the figures for March 2020 show that unemployment has risen from 5.4% to 16.5%, when adjusted to take account of those who have become unemployed as a result of the crisis:

This rate will have risen since these figures were released. The latest Government Draft Stability Programme is predicting a peak rate of 22% unemployment, peaking in the second quarter of the year before gradually reducing as containment measures are eased. Of course, this is an employment forecast made in a painfully uncertain political and economic climate with much more guesswork involved than usual.

If we look again at the March figures, we see that in real terms, more than 513,000 people were registered for support.

Again, this figure has since increased to the point of doubling. The Government's most recent working paper on how the labour market has been impacted suggests that there were more than 1.1m persons in receipt of State support interventions to the labour market by the week ending April 24th This comprised those on the Live Register and those in receipt of the Pandemic Unemployment Payment and the Temporary Wage Subsidy Scheme. The latter two groups accounted for approximately 920,000 workers availing of state support.

What these figures do not show is the age range of those currently in reliance on government support. However, early estimates tell a familiar story. CSO figures for the new COVID-19 Adjusted Measure of Unemployment indicate a rate of 34.0% for those aged 15 to 24 years and 14.1% for those aged 25 to 74 years. This indicates that approximately 48.1% of those currently reliant on government support are aged between 15 and 74.

Once refined further, these figures will likely show decreases around the margins and increases to the core working-age group.  Again, the Government's most recent working paper on labour market disruption further bears this out by suggesting that those who have lost their jobs as a result of the impact of Covid-19 are more likely to be younger workers: 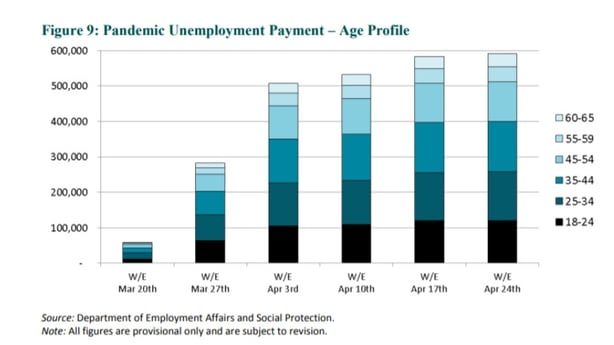 So where does that leave us? Essentially, a huge proportion of our workforce are now reliant on the infrastructure of the Irish welfare state. Were it permitted, history tells us that a proportion of this displaced workforce would potentially emigrate. At present, this is not an option. We can't export our "problem" this time, meaning we now have a substantial workforce that must continue to be supported domestically.

In the short term, the response has been to create a two-tier welfare system; with one group of welfare recipients receiving a rate far above that of another. This too is unsustainable while also being inequitable. Furthermore, the twelve weeks that the emergency payment measures are scheduled to last is quickly running out.

On the basis that the crisis is unlikely to be over by then, radical ideas are needed. The government needs to begin to look at a range of measures such as universal basic income, reduced working weeks and job-sharing and at how these can be introduced in an equitable and sustainable way. Whatever happens, there is little point in waiting for a proportion of our workforce to simply turn out the light. This time, nobody's leaving.

How our generosity for charities exposes the failure of state