Opinion: the family-owned pub has traditionally been the focal point of rural community life, but that is rapidly changing in 21st century Ireland

The Irish publican has played a hugely significant role in the social, economic, political and literary life of Ireland. As a country that is synonymous with pubs, it’s ironic that the role these men and women have played in facilitating our culture of community interaction and drinking customs has received relatively little attention. As we approach the first anniversary of the opening of Irish pubs on Good Friday, it’s worth reflecting on their status in an ever-changing Ireland.

The way it was

So what is it that endears us to a publican and prompts us to go back time and again? Obviously, an intimate knowledge of the ins and outs of local affairs remains indispensable. But does this characterisation still hold true and is it enough any more? Many are still credited with being good listeners and confidantes. Indeed, pubs are often compared to confession boxes with publicans themselves being analogous to priests and having the "patience of saints".

As observers of human frailties – like alcoholism and hostile customers - they need the fortitude of referees and peacemakers. At all times, they must maintain a capacity for discretion and diplomacy given the eclectic mix of characters that can come through their doors. Using their trademark dexterity and charm to ensure the survival of their rural premises, and thereby their communities, has never been more challenging.

From RTÉ Archives, a report for the Out & About show in 1987 on the the Mullingar Bachelors social club who meet at Con’s Pub in the town

Almost 90 years ago in a study entitled Family and Community in Ireland, anthropologists highlighted how provincial publicans operated as bankers and matchmakers. Some pub owners coming towards retirement often sought out country girls to marry their sons, "country girls being preferred to city girls as they were believed to be hard workers who already knew how to cook and clean and had no grand ideas".

In 1997, social historian Kevin C. Kearns described the Irish publican as the central and essential ingredient in the composition of a public house, with their role going far beyond that of congenial host behind the bar. Historically, the publican was seen as a leading figure in the local community, performing vital services for people in times of need. They mostly lived above their shop, knew customers intimately, generously dispensed advice, guidance, financial assistance and even mediated family disputes. "They customarily provided money and drink for life’s great moments", wrote Kearns, "births, christenings, first holy communion, weddings, wakes and burials".

Notwithstanding this, they were still regarded historically by others as bastions, if not cauldrons, of chauvinism. Nowhere was this more evident than in a December 2003 article in the Irish Times about passing of 92 year old Waterford publican Tom Maher. When asked why he wouldn't serve women, the owner of Maher’s Moondharrig pub in Waterford for 77 years said "weak women, strong drink, long hours and short skirts are a bad combination".

From RTÉ Archives, a Newsbeat report from 1970 on Kilkenny’s last men-only pub

Pubs in the modern world

Many country publicans however realise that this nostalgic world of their predecessors has given way to modernity and this transition has brought many challenges. These include government legislation like the smoking ban, drink driving laws, higher excise duties and VAT compared to other countries and local authority rates and regulations. Other factors such as high insurance costs and the increased popularity of home entertainment aided by cheaper drink in supermarkets are also significant.

These matters are compounded in the countryside by spatial remoteness, low population density and infrastructural deficits such as a lack of public transport. Indeed, many rural publicans now provide a taxi service to their patrons to ensure their sustainability. Operating in an environment where the issue of social isolation is to the fore requires creative thinking from government, communities and publicans themselves to help people get out and about, meet friends, have a drink and get home safely – no easy task.

Others have closed their doors and simply sold their licenses to the ever-growing number of service station and supermarket retailers. In keeping with the demise of the retail high street of many provincial Irish towns, ownership of such once thriving prominent commercial establishments is akin to having the right horse at the wrong race.

Due to these circumstances, the level of intergenerational transfer is also less prevalent than in yesteryear. The statistics speak for themselves. In 2005, there were 7,831 pubs in Ireland outside of Dublin, but that number dropped by 18.7% to 6,367 by 2017. In a 2018 AIB report on the licensed trade, Tony Morrissey from Morrissey’s, the auctioneering firm that specialises in pub sales suggested, that it’s going to be "very difficult" for rural pubs to survive if they are not "turning over €8,000-€9,000 a week". By contrast, Dublin based publicans continue to fare much better, principally due to the demographics of a much higher population to pub ratio.

Historically, many publicans juggled other careers which saw them being undertakers, auctioneers, farmers, grocers, hardware merchants, postmasters and a fair sprinkling of politicians (local and national). Their roles today now include running gastro-pubs, being craft-brewers, baristas, off-license owners as well as being knowledgeable in an array of new gin, whiskey, wine and craft beer options.

Essentially, the remaining publicans must be more innovative and entrepreneurial in reinventing their business and themselves to a contemporary Ireland. Many of these are overseeing businesses that are event driven, like maximising the benefits of local festivals and big sporting events. Many others are innovating through social media and creating events themselves such as themed music weekends, salsa nights, book clubs, table quizzes or small theatre productions. All of these require commercial nous to succeed.

Trailer for The Irish Pub, Alex Fegan's documentary on the Irish pub and the publicans who run them

In the words of Billy Keane, the son of the playwright John B. who is now running the family pub in Listowel, Co Kerry, "a good publican is better than any government official when it comes to keeping our small places alive". Using his Irish Independent column as a call to action to all rural dwellers, Keane quotes his mother when suggesting that what’s needed most is for neighbours "to put on the coat" and come out for a drink. Cheers to that! 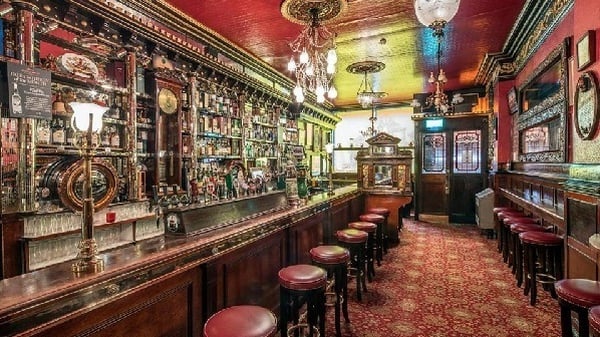 What's next for the Irish pub?