Johnny Sexton is set to make his return for Leinster in Friday night's BKT United Rugby Championship meeting with Ulster in Belfast.

The Ireland captain sat out the opening two wins against Zebre Parma and Benetton, but has been named among the replacements for the Interpro at Kingspan Stadium.

Number 8 Jack Conan also makes his first appearance of the season, one of two changes from the side that started the Round 2 win against Benetton.

Conan joins Josh van der Flier and Ryan Baird in the back-row, replacing Caelan Doris who is following the graduated return to play protocols for concussion.

The other change sees Ross Byrne start at out-half, having been a replacement for the injured Ciarán Frawley a week ago.

James Ryan, who was a late withdrawal from the side to face Benetton a week ago due to a tight hamstring, has been passed fit to play and takes his place among the replacements.

There's no place for Jamison Gibson-Park, who had been expected to return following illness last week, while Tadhg Furlong is also yet to make his first appearance of the season.

Ulster head coach Dan McFarland has made just one change from last week's win in Llanelli, as they go in search of their third win in a row against their neighbours.

Tom O'Toole swaps with Marty Moore at tighthead, to join Andrew Warwick and Rob Herring in the front row.

With Iain Henderson still unavailable, Alan O'Connor continues as captain, joining Kieran Treadwell in the second row, while Nick Timoney packs down at number eight, in between the Rea brothers Marcus and Matty.

The backline is unchanged, with John Cooney and Billy Burns in the half-backs, Luke Marshall and Stuart McCloskey in the centre and Jacob Stockdale, Aaron Sexton and Mike Lowry completing the first XV. 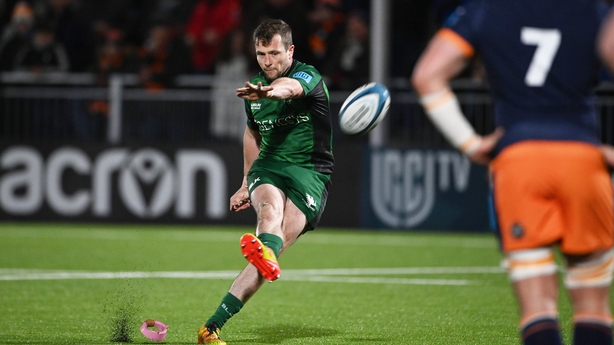 Connacht will once again be without Jack Carty (above) for their meeting with the Bulls at Loftus Versfeld on Friday evening (kick-off 5.30pm Irish time).

The province's captain linked up with the touring squad in South Africa this week, but hasn't been included in the 23 to take on the Bulls.

The out-half has been recovering from wrist surgery in the off-season, with director of rugby Andy Friend saying they hope to have him available "in the not too distant future".

Following last week's defeat to the Stormers, David Hawkshaw comes in to start his first game for the province at out-half, one of seven changes from the defeat in Stellenbosch.

The former Leinster man partners Kieran Marmion at scrum-half, with Tom Daly restored to the centre at the expense of Byron Ralston.

It's a new second row combination of Leva Fifita and Oisin Dowling, while Josh Murphy shows his versatility by moving onto the back row, where he's joined by the returning Conor Oliver, and captain Jarrad Butler.