Given the strength of their starting line-up, it would have been hard to expect anything less that a bonus-point win for Leinster in their first home game of the BTK United Rugby Championship.

And from the moment Dan Sheehan touched down from the back of a maul on six minutes, it never seemed in doubt, as they eased past Benetton 42-10.

Sheehan scored 10 tries last season, and he's already nearly halfway towards reaching that total, after a phenomenal four-try showing, three of which came off the back of dominant rolling mauls.

The 24-year-old has amassed a remarkable try-scoring rate in Leinster colours, his four scores tonight bringing him up to 20 for the province in just 30 games.

And while his tries grabbed the headlines, he'd have had stiff competition for Player of the Match.

Munster fans could be forgiven if they grimaced their way through the game, such was the impact of Jason Jenkins [below]. The South African lock's sole season in Limerick was plagued by injury, and his performance tonight highlighted the very reason Johann van Graan brought him to Ireland last year.

Stolen lineouts, hard carries, heavy tackles, and an engine that saw him popping up on the shoulders of players in space, the Springbok was everywhere on his home debut. 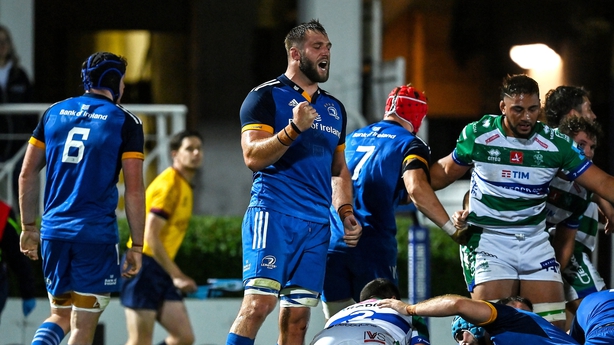 All eyes were on Ciarán Frawley as he started a rare Leinster game at out-half, and the versatile midfielder looked comfortable in the role, aided by an excellent Robbie Henshaw, who slotted in at first receiver off many set-plays.

Frawley's night ended early on 44 minutes, a first-half shoulder knock seeing him withdrawn early in the second half as a precaution, while it was also concerning to see Caelan Doris depart the game early for a HIA, from which he never returned.

Leading 21-3 at half time, Josh van der Flier, Sheehan and Luke McGrath added further scores to wrap up the bonus-point, showing no signs of disruption after a week of speculation surrounding senior coach Stuart Lancaster, who is reported to be leaving to join Racing 92 this summer.

Leinster tested the Benetton back field with some prodding Jimmy O'Brien kicks in the early stages, and it was the kicking game that led to their opening score inside six minutes.

This time it was Henshaw who dropped a crossfield kick towards an open corner, as Caelan Doris chased it down. It fell kindly for the number 8, and although Benetton's defence scrambled to cover, the Italians' winger Mattia Bellini was adjudged to have tackled Dave Kearney early, giving Leinster a penalty fine metres out, and drawing a yellow-card from referee Jaco Peyper.

Within seconds, Leinster made it count. Sheehan found Ross Molony at the lineout, and it was the hooker who collapsed over the line following a dominant maul, the first of what would be three first-half tries for the Ireland international. With his first shot off the tee, Frawley split the posts to make it 7-0. 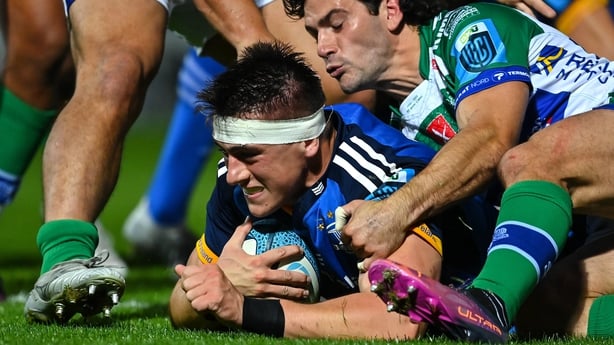 The home side couldn't add to their lead for the remainder of the sin-bin period, but they did grab their second try just as the Italians were restored to 15 men.

Again, they kicked a penalty to the 22, and Sheehan [above] pounced to score, but it was a much different process. Going off the top of the lineout, big carries from Henshaw, Jenkins and Molony sent them close to the posts, before the prolific hooker picked and dived over the line, to give Frawley the simplest of conversions to make it 14-0.

Benetton trimmed the lead with a Giacomo Da Re penalty, but by the 29th minute Leinster and Sheehan had their third. It was depressingly familiar for the visitors, as Leinster hit Molony at the lineout, before marching the maul forward at will, and the bandaged head of Sheehan emerging from the rubble to seal his hat-trick, Frawley again converting to extend the lead to 21-3. 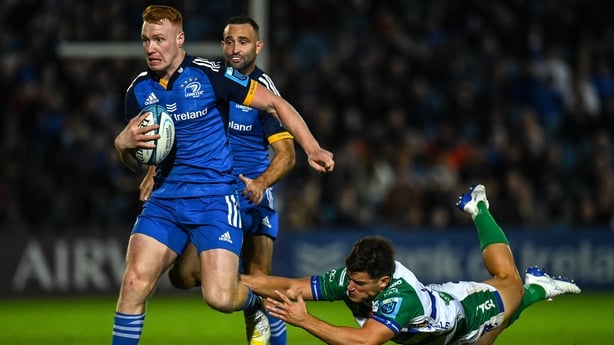 They had to wait until the second half to wrap up the bonus-point, Van der Flier diving over in the corner to seal it. Ross Byrne - who replaced Frawley [above] on 44 minutes - created the score, his delayed pass sucking in Benetton's Scott Scrafton and creating the overlap, before they ran it through the hands of Larmour to send Van der Flier over to score. It was Byrne who floated the touchline conversion, to give Leinster a comfortable 28-3 lead.

On 53 minutes, Sheehan capped off his night with his fourth, and Leinster's fifth, once again rolling their maul over the line. It was his final act of the evening, and while Benetton may have been glad to see the back of him, the sight of Rónan Kelleher entering the game would have quickly ended that.

In spite of the tries, it was the introduction of Cian Healy which drew the loudest cheer of the night. The 34-year-old's arrival was his 250th for the province, with just Gordon D'arcy (257) and Devin Toner (280) ahead of him on the province's all time list.

Benetton scrum-half Manfredi Albanese finally gave the Italians a positive moment when he ran in for a try just short of the hour mark, after Leinster's defence went to sleep down the blind side of a ruck, and the conversion from Da Re left the scores 35-10. 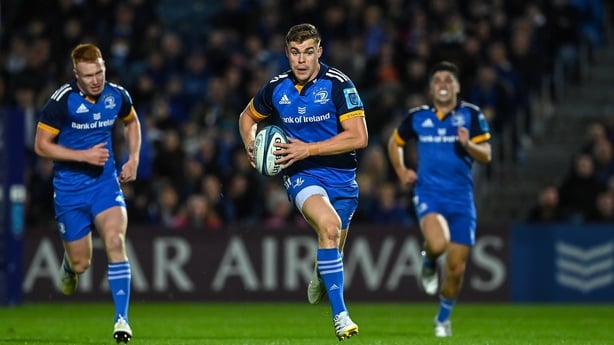 Leinster thought they were in for try number six when Luke McGrath popped up to Garry Ringrose [above] to score on 62 minutes, but after a check with the TMO it was wiped out, after McGrath had been bundled into touch by a super covering tackle by hooker Gianmarco Lucchesi.

If McGrath felt any guilt over throwing his offload too late, he made up for it shortly after, breaking from the back of another maul in the 22 to dart over and get himself on the scoresheet, as Byrne converted again, restoring the 32-point lead at 42-10. 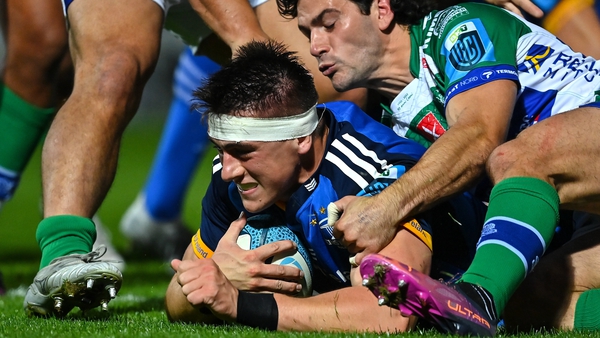