Bundee Aki was sent off as Connacht were beaten by defending United Rugby Championship winners the Stormers in Stellenbosch.

Ireland international Aki was penalised for a dangerous clear-out midway through the second half, extinguishing any hope of a fightback from the Irish province.

Evan Roos touched down early for the hosts and, though they could not add another try before the break, they took a 13-8 lead into half-time thanks to the kicking of Manie Libbok, with Dylan Tierney-Martin going over for the visitors.

Connacht were 19-8 down when Aki was given his marching orders and quickfire tries from Andre-Hugo Venter and Hacjivah Dayimani put the result beyond doubt, with Jack Aungier crossing for a late consolation.

Marcel Theunissen wrapped up the bonus point after the hooter.

Roos dominated the end-of-season awards last term and took only three minutes to make an impact this time around.

The No 8 exploited a gap in the Connacht defence and made light work of Mack Hansen's attempted tackle as his rampaging run sent him over in the corner.

Libbok slotted the conversion and added a penalty after Conor Fitzgerald had got Connacht off the mark from the tee.

The Stormers No 10 was off-target with a relatively straightforward penalty after 22 minutes but normal service was resumed when he made it 13-3 five minutes later.

Marvin Orie was then sin-binned for an accumulation of Stormers offences and Connacht quickly made their hosts pay.

Half-time: Stormers 13-8 Connacht
Tierney-Martin drives over just before the break as the Irish province take advantage of their extra man
📺 Watch live on @RTE2 and @RTEPlayer https://t.co/YsB84BIDQ7
📱 Updates https://t.co/eV4vydsSAq#URC pic.twitter.com/BcCAgcVoWK

Following a period of sustained pressure on the Stormers five-metre line, Connacht eventually drove Tierney-Martin over, although Fitzgerald was wayward with the conversion.

Libbok scored two more penalties either side of Connacht losing Caolin Blade to a serious-looking ankle injury early in the second half.

The visitors thought they had closed the gap when Tom Farrell went over after collecting a David Hawkshaw cross-kick but the try was chalked off for Aki's dangerous clear-out on Seabelo Senatla in the build-up – an offence that earned Aki the red card.

That dismissal swung momentum decisively in the Stormers’ favour and Venter touched down at the end of a mesmerising passage of play to make it 26-8 with the help of Libbok’s conversion.

Dayimani quickly added another and although Aungier’s try – converted by Hawkshaw – gave Connacht fans something to smile about, it was Theunissen who had the final say at the death, with Libbok adding the extras. 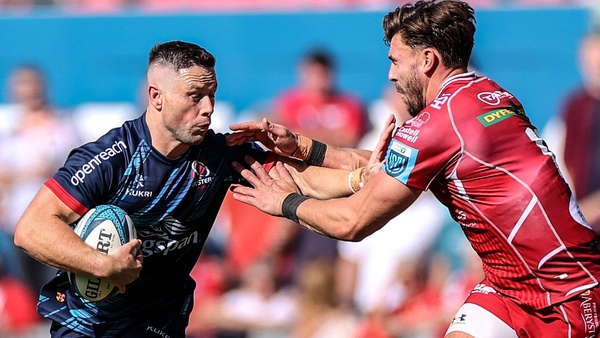