Two Irish provinces are looking to maintain their winning start, while two others are hoping to get off the mark.

Just like last week, Round 2 of this season's BKT United Rugby Championship sees Leinster take on Italian opposition, while Munster head to Wales.

Graham Rowntree's side will be hoping to fare better against Dragons than they did against Cardiff a week ago, particularly with more of their first-team regulars available for the trip to Newport.

Leinster's preparations for last week's scrappy win at Zebre were disrupted by a burglary at the home of head coach Leo Cullen, but they look primed to hit the ground running tonight at the RDS, as Ciarán Frawley is given a chance to impress at out-half in a first XV that is close to full strength.

Ulster enjoyed the biggest win of the Irish teams last Saturday, with a bonus-point victory against Connacht, and Dan McFarland's side are in Llanelli to take on the Scarlets, who shared the points in a back-and-forth draw with the Ospreys a week ago.

If Connacht want to bounce back from that defeat, they'll have to do so in style, with a daunting trip to champions Stormers in Stellenbosch, in what will be the South African side's first game of their title defence.

Saturday Sport and Sunday Sport on RTÉ Radio 1 will have score updates across the weekend.

Friday is expected to be showery in Dublin, but it's hoped the worst of the rain will have passed before Leinster and Benetton kick off at the RDS. Scarlets and Ulster are likely to have ideal conditions in Llanelli on Saturday, with temperatures around 15C expected, while it will be slightly warmer in Stellenbosch, where Connacht face the Stormers. The good early-season conditions are also expected to hit Newport on Sunday, where Munster and Dragons will face off on a warm, sunny afternoon.

For the second week in a row, it's Italian opposition for Leinster, and while they'll be hoping for a repeat result after last week's bonus-point victory against Zebre Parma, they'll certainly need a better performance, having stumbled to a 33-29 win.

Leinster beat Benetton handsomely in their last meeting in March but the Italians have given them a good game in recent seasons, and have lost just one of their last three visits to Dublin in all competitions.

Marco Bortolami's side impressed in last week's 33-11 win against Glasgow Warriors in Treviso, however they will be facing a step-up in class against Leinster, who welcome several Ireland internationals back into their team this week.

While Johnny Sexton, Tadhg Furlong and Jamison Gibson-Park continue to sit out, 11 of the starting line-up toured New Zealand with Ireland over the summer, and six of those started the decisive third Test.

Leo Cullen's side last played at home in the URC semi-finals against the Bulls in June, and you'd have to go all the way back to 2004 for the last time they were beaten on their home patch twice in a row in the domestic league.

Ulster were far from perfect in their opening day win against Connacht, but Dan McFarland's side produced a mature second half performance to easily see out the Interpro win.

Next up, they travel to Wales to take on the Scarlets, reuniting with their former coach Dwayne Peel, who departed Belfast to become head coach in Llanelli last summer.

The Ulstermen have not been victorious at Parc y Scarlets in the URC since December 2012 although they did beat them there by a solitary point in the Champions Cup in December 2018.

The last three meetings between the sides have all come in Belfast, all three of those results going to the Irish side, with the most recent being a 27-15 win last January.

Scarlets began the new season with a 23-23 draw at home to Ospreys on Saturday but have not won in the competition since beating Dragons in Newport in April.

With such a difficult first five games to the season, a fast start was vital for Connacht, yet they were hugely disappointing in last week's 36-10 defeat to Ulster in Belfast.

Both sides' fortunes have changed quite a bit since their most recent meeting last February. Connacht have won just three games in that period, while that defeat in Galway was the Stormers' final blemish on their road to the title.

The South African side will crucially be without some of their Springbok contingent though, with Damian Willemse, Steven Kitshoff and Frans Malherbe among the frontline players unavailable.

However, Connacht will be close to full strength, with Bundee Aki, Finlay Bealham and Mack Hansen all cleared to make their returns, although Jack Carty remains sidelined following wrist surgery in the summer.

The Stormers have also had to give up their home advantage, with the game moved to the Danie Craven Stadium in Stellenbosch due to a now-cancelled Justin Bieber concert at their traditional Cape Town Stadium.

The 2016 champions were actually the only Irish side to win in South Africa last season, defeating the Lions 33-30, and have a good record in the country, winning four of their last six games in the southern hemisphere.

Graham Rowntree and his coaches have been keen to stress that their transformation will take time, but in the short term they will certainly hope to be better than they were last week.

Munster looked quite sluggish, particularly in defence, for last week's 20-13 loss in Cardiff, and although they are away from home again, this week's visit to the Dragons presents them with a great opportunity to get their confidence back.

The province have won their last eight in a row against the Dragons, the most recent of which was a 64-3 hammering at Thomond Park in March.

Recent history would suggest that home advantage doesn't count for much for the Dragons, whose last win at Rodney Parade came in the Rainbow Cup way back in April 2021.

The game will also see JJ Hanrahan come up against his home province with the Kerryman having joined Dragons from Clermont over the summer, kicking two penalties in last week's 44-6 defeat to Edinburgh. 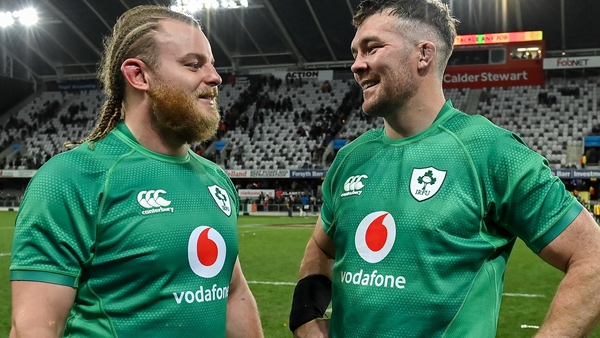