The trio have all been released from Ireland camp for the rescheduled derby, which was originally due to be played on New Year's Day.

Stuart McCloskey will make his 150th appearance for the club, who are looking to build on last Friday's 48-12 win over Cardiff.

Craig Gilroy comes in to start on the left wing, with Baloucoune and Lowry joining him in the back three.

Last Friday’s half-back pairing of Billy Burns and Nathan Doak has been retained, with former Leinster pair John Cooney and Ian Madigan available off the bench.

Andrew Warwick is named at loosehead, with John Andrew starting at hooker and Marty Moore packing down at tighthead.

Alan O’Connor is named in the second row and will captain the side.

He will partner Sam Carter who comes in to start.

Marcus Rea makes a switch to blindside flanker, with Timoney returning from Ireland camp to be selected at openside.

Duane Vermeulen (below) comes in to complete the forwards at number 8. 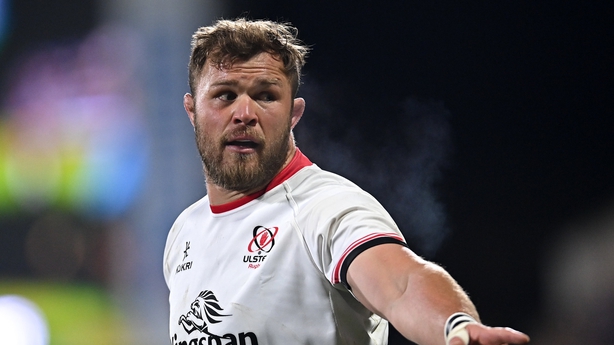 Leinster have been able to include nine internationals in their team, as they look to gain revenge for their November defeat to Ulster.

Three of those come in the front row, with Ed Byrne, James Tracy and Michael Ala'alatoa all given starting roles.

The rest of the pack is unchanged, with academy lock Joe McCarthy once again partnering Ross Molony in the second row, and Rhys Ruddock, Scott Penny and Max Deegan the loose forwards.

The two remaining changes come in the backline, with Rory O'Loughlin and Adam Byrne - both of whom confirmed moves away from the province next season - coming into ths eide.

O'Loughlin replaces Harry Byrne in the team, starting at outside centre as Jamie Osborne shifts across to the 12 shirt.

Byrne comes onto then right wing with Jordan Larmour out injured, with Jimmy and Tommy O'Brien staying in the back three.

Luke McGrath captain's the side at scrum-half, inside number 10 Ross Byrne. 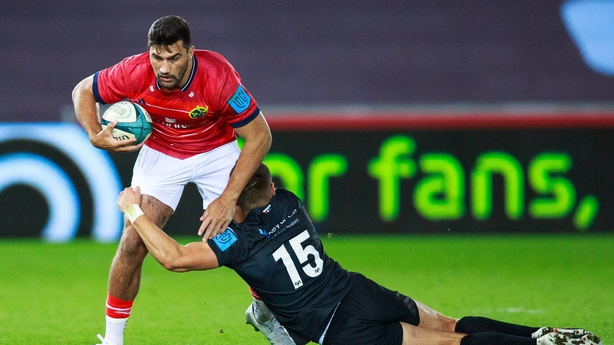 Damian de Allende (above) is set for his first Munster appearance since New Year's day.

The Springboks centre is named on the bench for tomorrow's game against the Bulls at Loftus Versfeld (2.05pm kick-off), having missed the last seven games due to an abdominal injury.

Head coach Johann van Graan has made seven changes to the side that hammered the Dragons at Thomond Park last week.

Calvin Nash returns to the right wing, with Shane Daly rested as Simon Zebo and Mike Haley complete the back three.

Chris Farrell continues at outside centre, while Rory Scannell provides a left-foot kicking option at inside centre, with Dan Goggin dropping out.

With altitude a factor, Munster are utilising the big kicking game of Ben Healy at out-half, pairing him with Neil Cronin in the half-backs.

Josh Wycherley continues at loosehead prop, while Niall Scannell and Stephen Archer both come into the side.

Fineen Wycherley and Jean Kleyn are paired together again in the second row, while Jack O'Donoghue captain's the side from blindside flanker alongside Chris Cloete and Alex Kendellen, who replaces Gavin Coombes. 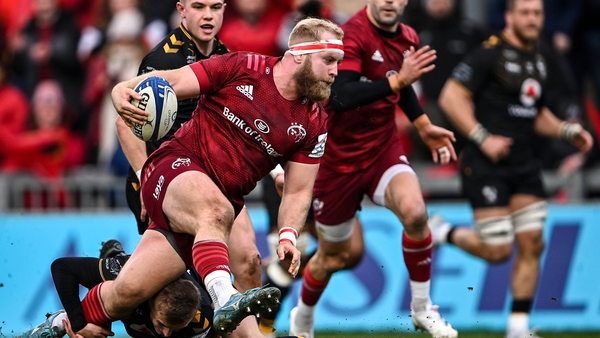